It is measuring itself against the best in class, using Hong Kong as a good reference point, as announced earlier, and now also the Taipei metro system, he said.

Mr Khaw noted that rail staff from the Taipei Rapid Transit Corporation (TRTC) - which was incorporated in 1994 - had in its early years visited Singapore to study the MRT, which began operations in 1987.

"We were then an exemplary MRT player and a subject of study," he said in a speech at a forum on rail infrastructure maintenance. 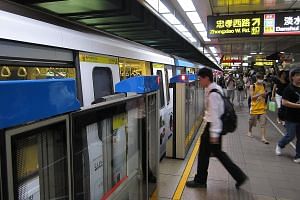 "Unfortunately, maybe due to complacency or distracted management attention, we lost our earlier standing. I prefer to use the word, we lost our mojo. Let's work hard to regain our mojo."

He has given rail operators SMRT and SBS Transit up to 2020 to achieve TRTC's record last year of a mean distance of 800,000 train-kilometres travelled in between delays of more than five minutes. This is a key metric used by rail operators to measure reliability.

Taipei's record exceeds Hong Kong's 520,000 train-km registered in the first quarter of this year, and Singapore's preliminary figure of 160,000 train-km in the same period. "We may not achieve those very high targets, but I think they can be extremely motivating, so that if we fail, in absolute terms it could still be a very significant improvement," he said.

For this year, the goal should be 200,000 train-km between delays, said Mr Khaw, and when this is achieved, "even more audacious" targets should be set. The target for 2018 should be 400,000 train-km, and then doubled subsequently.

"My political mantra is, under- promise, so hopefully you can over-deliver. However, when organisations need to be transformed... I think we need to do the opposite - set clear stretch targets, motivate the troop, aim high and work our butts out," he said.

His remarks come on the back of rising rail incidents. Last year, there were 29 major rail disruptions, up from 14 in 2014. In April this year, a power fault resulted in an unprecedented breakdown of train services along three MRT lines and one LRT line.

Mr Khaw also shared lessons from a study trip to Taipei made by officials from the Land Transport Authority (LTA) and rail operators.

Among other things, LTA is working with software vendors to develop an enterprise asset management system. This will allow a systematic assessment of the condition of rail assets by the LTA, SBS and SMRT.

The two operators' incident response and recovery procedures are also being reviewed, and the LTA is working with the TRTC to attach staff from SBS and SMRT to its metro workshops. Mr Khaw said operators should follow the TRTC's asset maintenance regimes since both cities' rail systems are similar.

"If they said they focus on this component and they replace it after one interval, I think just copy them first," he said. "We have no time to waste. I can't wait, you can't wait, our commuters can't wait."

He expressed confidence in turning rail reliability around. "At the moment, I describe the cup as 'three-quarters empty'. But I appreciate the efforts of our colleagues who have made the cup 'one-quarter full'. I'm confident we will have a 'full cup' in due course."

Responding to his speech, the National Transport Workers' Union said it stands ready to work with the LTA and rail operators. Executive secretary Melvin Yong said it was also important for operators to rally the staff towards a common goal. "Being directly involved in the ground operations, their inputs will be useful and important in this transformation process," said Mr Yong, who is also a Tanjong Pagar GRC MP.