Mr Tony Tay said despite the accolade, he will continue arriving at Willing Heart's kitchen at 4am every day, working alongside the 200-250 daily volunteers, so more hungry mouths can be fed.

Said the former businessman: "We cook together, if there are not enough drivers, I'll go and drive and deliver the food. Then after that, collect sources of food for the next day. By the time we're done, it's about 6pm."

For his efforts, Mr Tay - who founded Willing Hearts in 2003 - was one of six to win the award this year. Sri Lanka's Ms Gethsie Shanmugam, who helped rebuild the war-scarred lives of women and children; and Ms Lilia de Lima of the Philippines, who led its economic zone authority for many years, were among the other winners.

In a statement announcing the winners on July 27 (Thursday), the Ramon Magsaysay Awards Foundation said 70-year-old Mr Tay was recognised for "his quiet, abiding dedication to a simple act of kindness - sharing food with others".

The Magsaysay awards, named after a popular Philippine president killed in a plane crash, were set up in 1957 by the trustees of the New York-based Rockefeller Brothers Fund. The first two winners from Singapore were pioneer ministers Lim Kim San and Goh Keng Swee in 1965 and 1972, respectively.

Seven days a week, Willing Hearts prepares and delivers one daily meal each to more than 6,000 beneficiaries. They range from the elderly, to people with disabilities, and those with medical issues or the jobless.

Mr Tay credited his volunteers. "If there are no volunteers to help, I don't think we can be where we are today."

There are only six full-time staff and the charity relies on donors - for their rental, electricity, food and oil supplies. "We're about 99 per cent donated," said Mr Tay. 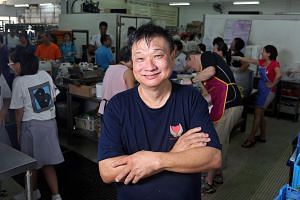 He does not subject his volunteers to a schedule. They can drop in any day of the week they please, and leave at any time. There is no roster, and no registry of his volunteers.

He said: "They have their own things to do. They must deal with their home problems before they can come to help. So if you have kids to send to school, send them to school first."

Part-time clinic assistant Peggy Ng, 50, said: "If you want to volunteer at other places, you have to go for training, fix a day to volunteer. But here, I can come and go as and when I want. So if I've something to do, I can just leave earlier."

He has no clue if the award will result in more donations and does not have any expansion plans.

"Don't worry about tomorrow, let tomorrow come. What happens if there's a disaster tomorrow?" he said.

Mr Keh Eng Song, formerly the head of Movement of the Intellectually Disabled Singapore, said of the award: "It's a great recognition of the very important work that Willing Hearts does. They not only provide daily meals to the underprivileged and marginalised but also deliver the food to them for free. This helps the beneficiaries to stay afloat and become useful members of our society."

"As a person, he is very humble with a very positive can-do attitude - something every Singaporean can emulate. This is not a small feat, considering he delivers across Singapore, serving thousand across religions and creed. He truly deserves the award and he makes Singapore proud."

Ms Melissa Kwee, CEO of National Volunteer and Philanthropy Centre, said of Mr Tay: "The former winner of the President's Volunteerism and Philanthropy award has enabled thousands of first-time volunteers to experience the joy of serving through what some may deem small or menial tasks, such as chopping, cooking and packing food.

"His life's work has helped many people, especially the more privileged among us, have a first-hand taste of how small acts of service can have a huge impact on others. This is so important, because simple experiences can mark the start of one's lifelong giving journey."

The Magsaysay awards has recognised about 300 people and 25 organisations, including the Association of South-east Asian Nations or Asean, since 1958.