SINGAPORE - A life could have been lost if not for a quick-thinking secondary school student from Temasek Secondary School, the Singapore Civil Defence Force (SCDF) said in a Facebook post on Wednesday morning (Sept 4).

National Civil Defence Cadet Corps (NCDCC) cadet Diniy Qurratuaini, 15, was on her usual bus ride home on July 19 when the bus knocked down a woman in New Upper Changi Road, rendering her unconscious.

The shock of the accident did not throw Diniy off her stride. The Secondary 3 student immediately asked a fellow passenger to call 995 before putting her first aid training to use, the SCDF said.

She found that the victim had no pulse and started performing cardiopulmonary resuscitation on the woman until she regained consciousness. She then stayed by her side until paramedics arrived at the scene.

"Diniy's quick thinking and selfless act showed that age is no barrier to saving lives," the SCDF said.

An SCDF spokesman added: "SCDF encourages members of the public to emulate the selfless actions of Diniy... This is vital because every minute could mean an increased chance of survival." 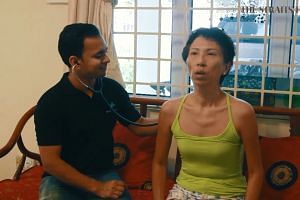 SCDF learnt about Diniy's actions from NCDCC, which had been alerted to the incident after Diniy relayed what happened to her form teacher the day after the accident. SCDF then decided to present the SCDF Community Lifesaver Award to Diniy.

Diniy said she realised the significance of her actions only much later. She told SCDF: "I continued my journey home and told my parents about the incident. Only then did I realise the magnitude of the situation."

Other students here have come to the aid of those in need of help on the road in recent years.

In January last year, the SCDF commended four secondary school students for saving a nine-year-old boy who was trapped under a car at Geylang East Avenue 1.

Together with other passers-by, they lifted the car to release the conscious but injured boy underneath.