SINGAPORE - Scores of people braved the queues forming at banks and cash deposit machines across the island on Thursday (Feb 4) for a shot at improving their fortunes in the new year.

The practice of banking in money on Li Chun, which some believe can help grow their wealth and ensure good luck, has caught on in recent years.

Joining the winding queue at the DBS Bank in Bedok Town Centre at around 11am, Madam Teo Eng Lee was seen specially clad in a red blouse for the occasion.

"I'm a traditional person. By doing this, I hope each year will be better than the previous one. I've done this for about three years now and my life has been smooth so far," said Madam Teo, who is self-employed.

The 58-year-old, born in the Year of the Dog, shared that she chose to come at 11am to coincide with her "auspicious" time period. 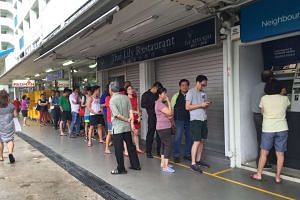 Her family of 10 will also be depositing money at various times of the day, depending on which zodiac signs they belong to.

According to different charts circulating online, there are four two-hour windows for people to bank in their cash.

For instance, one such chart by shipping company 65daigou claims that those born in the Year of the Ox, Rabbit and Monkey should deposit their cash between 3pm and 4.59pm. Earlier on Thursday morning in Bedok, people were spotted queuing as early as 3am - there was a 3am-4.59am window - to bank in their cash.

Retiree Madam Choo, 75, and her husband Michael Lim, 78, were among the early birds at the DBS and UOB bank branches in Bedok at around 10.30am and had to queue for only about 10 minutes.

Madam Choo told The Straits Times that she had heard from friends about the practice some years ago and decided to try it out last year and thought the year went by quite smoothly.

Mr Lim added: "Chun is the start of spring. I deposited money today because I believe it will give me prosperity for the new year. It's like hoping for a good harvest." 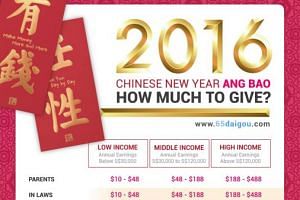 Ms Charlyn Tan, a 36-year-old sales administration executive, started queueing at DBS Bank with her colleague, Ms Wong Yen Nee, 29, at around 11.30am.

Ms Tan said they expected to wait 45 minutes for their turn. Both had checked for their auspicious timings and brought a specific amount of money based on their zodiac signs for extra luck.

"There's no harm in trying. It's not very difficult to do and it's also a good habit to save money," said Ms Tan.

Others, however, could not understand the hype over Li Chun.

Polytechnic student Lim Jian Hui, 20, who said he found it unusual that there was a queue to deposit money, was made to wait 45 minutes instead of the usual 15 minutes.

He had heard about Li Chun from his mother but does not believe in it. "It's just a superstition and I don't think it works. I will probably avoid going to the bank on this day next year to avoid the queue."

Some banks, aware of the popularity of the practice, were prepared for the onslaught.

A spokesman for United Overseas Bank said the bank had added more staff and services to cope with high demand: "Longer queues were seen at our cash deposit machines after 3pm, as it was the auspicious timing to usher in the year of the Monkey.

"To ensure that our customers had a  good customer experience, we catered for extra manpower at our branches, and also ensured that cash deposit machines were serviced and emptied to accommodate the extra volume of cash deposits.

"There were also special seated queues for pregnant women, the elderly and disabled.”