SINGAPORE - Long queues of millionaire hopefuls formed outside Singapore Pools outlets on Friday (Feb 19) for the Toto Hongbao Draw. And the rain did not deter people from trying to strike rich at the last minute.

There was a snaking queue with about 100 people at 4.30pm at the Block 211, Hougang Street 21, Singapore Pools outlet, which had sold last Thursday's (Feb 11) winning ticket for the $9.5 million prize, which was scooped by one winner. It was the largest amount won by a single punter.

For Mr R. Thiru, 28, a gas pipe construction worker, last Thursday's win at the outlet was reason enough for him to try his luck there. "I hope to win this week. If I win, I will give the money to my mother and father, and the rest of my family," he said.

Ms Jacey Neo, 32, a quality assurance engineer, who bought $10 worth of tickets, said her husband had encouraged her to give the draw a go. But she was still mulling over what to spend her prize on if she won.

Less than an hour before sales close at 9pm, some punters were still buying their tickets. At a Singapore Pools outlet at Block 303, Choa Chu Kang Avenue 4, shipyard worker Kannathasan, 33, said that he was just trying his luck. "If I win, I'll be sending the money back to India to my family and wife."

Businessman Desmond Soh, 49, said the outlet was lucky and had produced winners before. He came at 8pm "because it sounds auspicious", he said. "If I win, I'll be donating part of it to charities and hospitals because it's the right thing to do. After that, I'll take care of my family then myself."

The jackpot for the special annual draw snowballed to $13.9 million when nobody won the Group 1 prize of $1.9 million in Monday's (Feb 15's) draw.

"The estimated jackpot prize of $13.9 million for Friday's Toto Hongbao Draw is the largest to date," a Singapore Pools spokesman told The Straits Times. 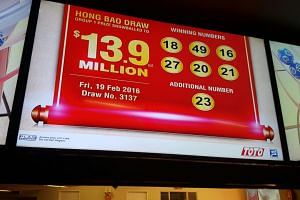 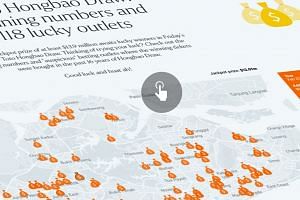 To win the Group 1 prize, a punter must pick all six winning numbers. However, the jackpot may grow even larger, depending on Toto ticket sales. In each draw, 54 per cent of sales are added to the prize pool.

The final prize amounts for the Hongbao Draw will be known only when sales close at 9pm on Friday (Feb 19). If more than one ticket holder matches all six numbers, the jackpot is shared, which happened in 2015, when there were two winners of the $12 million Hongbao Draw.

The draw will start at 9.30pm on Friday (Feb 19) at the Singapore Pools Building in 210 Middle Road.

According to the Singapore Pools website, the odds of winning the Toto Jackpot is one in almost 14 million. The website also says that the snowballing feature was introduced in 1981, and it allows prize amounts to grow if there are no winners.