SINGAPORE - A reticulated python and a king cobra were filmed locked in battle along a trail in MacRitchie Reservoir recently.

The video, which was uploaded by Facebook user Sheldon Trollope on Tuesday (May 30) evening, has since gone viral with over 220,000 views.

"So this happened right by where I live on the MacRitchie North Trail," wrote Mr Trollope, who added that it was his neighbour who had filmed the fight.

Mr Trollope told The Straits Times on Wednesday that the trail he was referring to in his post is the MacRitchie Nature Trail that links to Upper Peirce Reservoir.

The location where the two large snakes were spotted is closer to Upper Thomson Road.

In the video, the snakes are seen squaring up to each other. The python is then seen lashing out with its tail, with the king cobra biting its opponent. 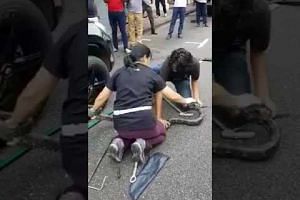 The king cobra subsequently fled into some nearby bushes. The python later died from the king cobra's bite, according to onlookers who witnessed the fight.

Several netizens who commented on Mr Trollope's Facebook post noted that his neighbour was quite brave to have stood so close to the two snakes.

While reticulated pythons are a fairly common sight in urban Singapore, sightings of king cobras - which are extremely venomous - are more rare.

Another fight between a king cobra and a reticulated python at the Nanyang Technological University made the news in August 2015.