An early morning search for a missing cat left a woman bleeding profusely and in need of stitches.

Mrs Chan Yin Ha was looking for her cat on the second storey of her Housing Board block in Sembawang Drive on Tuesday.

As she searched among some potted plants at around 4am, she suddenly felt a sharp pain on her left leg. Thinking her cat had scratched her, she kicked her leg out instinctively and looked down.

It was then that she saw that a 3m-long python had bitten her.

The 42-year-old, who is afraid of snakes, told The Straits Times on Wednesday that she "freaked out". "I thought it would coil around me," she said, adding that she immediately ran away from the snake.

Mrs Chan went to a neighbour's flat to get help but nobody came to the door. She then returned to her third-storey flat, bleeding profusely. Family members washed her wounds and called for an ambulance. The Singapore Civil Defence Force said that it received the call for assistance at 4.04am.

According to Wanbao, the python had retreated into a water pipe. The pest control agency poured hot water into the pipe, forcing the reptile to flee into a drain on the ground floor, where it was caught.

Mrs Chan's neighbour on the second storey eventually opened the door and found a slipper at the doorstep, as well as a trail of blood along the corridor, Chinese evening daily Lianhe Wanbao reported.

Thinking that there had been a fight, the neighbour called the police, who followed the trail of blood to Mrs Chan's flat. She said that the police then called a pest controller.

According to Wanbao, the python had retreated into a water pipe. The pest control agency poured hot water into the pipe, forcing the reptile to flee into a drain on the ground floor of the block, where it was caught.

Mrs Chan said she was taken to Khoo Teck Puat Hospital, where she received stitches and was placed under observation for a few hours. She was given four days' medical leave. 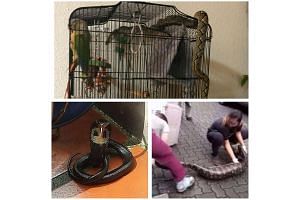 The store assistant said it was not the first time a snake has been spotted near her home.

In 2016, she encountered another snake in the drain on the ground floor of her HDB block. At that time, she called the town council, which sent a pest control company. She also told the town council about the most recent incident.

Mrs Chan said her cat eventually returned home safely. She added that she will try not to let her cat out of the flat too often as she fears for its safety, and hers, after the snake encounter.

Mr Kalai Vanan Balakrishnan, deputy chief executive of the Animal Concerns Research and Education Society (Acres), said Mrs Chan's encounter was "an unfortunate freak incident". He added that snake bite incidents in Singapore are rare and that the python had probably been hiding among flower pots waiting to ambush small prey, like rats, when it bit Mrs Chan.

Mr Kalai added that if a person is bitten by a snake, he should stay calm and seek medical help. Take note of its size and colour, as identifying the species will help in establishing what treatment is needed.