Hence, allowing some form of legal online betting, but in a tightly controlled manner, is "a realistic and clear-minded approach", said Senior Minister of State for Home Affairs Desmond Lee in Parliament yesterday. He revealed that last year, close to 300 people were arrested for illegal gambling, with about 50 charged under the Remote Gambling Act. The police carry out more than 100 raids against illegal gambling every year.

These statistics suggest that online gambling still persists despite the blocking of hundreds of websites, bank accounts and financial transactions linked to remote gambling services, following the passing of the Act in 2014, said Mr Lee.

Mr Lee was responding to a question by Ms Denise Phua (Jalan Besar GRC) about the online gambling situation in Singapore in the past two years. She was among five MPs who had raised concerns about the Government's decision last month to allow lottery operators Singapore Pools and Singapore Turf Club to launch online gambling services, following applications to be exempted from the Act. 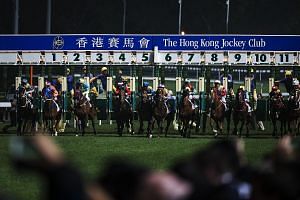 Ms Phua also asked if the Government will consider a total ban on remote gambling, "in the view that... Singapore has banned many less significant things, such as chewing gum and pornographic materials".

Mr Lee said that a complete ban does not mean that illegal online gambling will stop. He cited a 2013 Ministry of Home Affairs (MHA) survey of more than 1,000 Internet users. Three in 10 acknowledged that they had engaged in remote gambling at least once in the past year, and two-thirds of them were between the ages of 25 and 44. And with the global Internet gambling industry estimated to be worth US$40 billion (S$55 billion) last year, with an annual growth rate of 6 per cent to 8 per cent over the past five years, the problem of online gambling is set to get worse.

"At this rate, the remote gambling market will double in size roughly every 10 years," he said. "Here in Singapore, we are not immune from these global trends, given our high Internet and smartphone penetration rates."

He also highlighted how permitting a limited number of state-approved companies to offer online gambling has allowed foreign jurisdictions such as Hong Kong and Norway to collect betting data - which would have otherwise gone undetected - and fine-tune their remote gambling policy. MHA will work with both Singapore Pools and Turf Club to conduct surveys and studies, he added.

Responding to a question by Mr Edwin Tong (Marine Parade GRC) about the measures to contain and control the potential of remote gambling to cause harm, Mr Lee said: "Our approach towards gambling is similar to many countries' approach in managing other vices, such as drinking and smoking.

"Although we discourage drinking and smoking, we do not have a complete ban. Instead, we manage the potential harm through regulations and public education."

He added that some have compared gambling to drug abuse and suggested a safety valve, too, for drug taking or drug offences.

"The magnitude of harm resulting from drug abuse is vastly different from and much more severe than that for gambling," Mr Lee said. "Our regimes towards drug abuse and vices, such as gambling, are necessarily different."

In response, Mr Tan said that a complete ban will not seal off access to gambling sites. The reality is that there will always be those who gamble online, in a space where there are no social safeguards.