PUB investigations showed that the contractor, Sato Kogyo, had constructed an undersized temporary diversion drain at the Upper Thomson MRT station construction site. The contractor failed to inform PUB before constructing the drain, PUB said in a press release on Tuesday (Jan 17).

Upper Thomson Road was flooded on Christmas Eve last year (2016) after a heavy downpour. The drain at the construction site for the upcoming Upper Thomson MRT station was choked, leading to a flash flood.

About eight businesses there were affected by the flood, according to a report by The New Paper.

PUB said it would be taking action against Sato Kogyo under the Sewerage and Drainage Act, and has also instructed the contractor to carry out rectification works to improve drainage in the area. 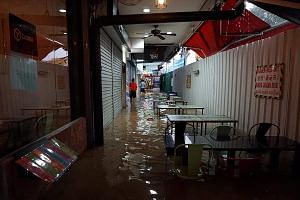 "Contractors must seek approval from PUB and notify PUB before carrying out any works affecting the stormwater drainage systems within and near their construction sites to ensure that these do not affect the functioning of the public drainage system," said PUB in its release.

"They must not construct, alter, discontinue or close up any stormwater drain without approval from PUB. PUB takes a serious view of unauthorised works on the public drainage system."