The Chinese quota under the HDB's Ethnic Integration Policy tends to be filled up in central areas such as Cheng San, Marymount and Serangoon Central, according to Dr Leong Chan-Hoong, head of the Institute of Policy Studies Social Lab.

He believes the proximity of such blocks to popular primary schools, including Special Assistance Plan schools that offer only Chinese as a mother tongue, contributes to the high demand from Chinese buyers - and their higher resale prices.

Parents are perhaps more willing to move closer to schools that they want to enrol their children in, he said.

The Malay quota tends to be filled in fringe locations such as Woodlands and Pasir Ris, while the Indian quota meets its limit in areas such as Admiralty and Kampong Java.

One possible remedy to address the influx of Chinese residents is to move these schools out to other locations where the quotas have not been filled, so that there will be more amenities in the fringe areas that will attract Chinese buyers, suggested Dr Leong.

This could reduce demand from Chinese buyers in the central region, and also remove the ethnic quota restriction for affected blocks so that minority sellers can sell to a larger market of buyers.

"It can also help to prop up resale prices in these fringe locations." 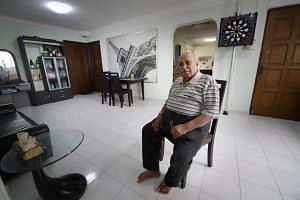 Mr M. Singh, who declined to give his full name, has been trying to sell his five-room flat in Queen's Road, Bukit Timah, for more than two years, with an asking price of about $910,000, on a par with resale prices for similar flats in his block over the past two years.

But he has had only two viewings.

"In comparison, my next-door neighbour, who has also put his flat on the market, gets people coming to see it every weekend.

"Unfortunately, the biggest draw is Nanyang Primary School, which mostly attracts Chinese buyers," said Mr Singh, who is in his 40s and works in the transport industry.