Those who spread it without knowing the truth or based on a misunderstanding will not face penalties, says Shanmugam

Only those who deliberately fabricate news and spread falsehoods are liable to face criminal charges under the proposed law against fake news, Law and Home Affairs Minister K. Shanmugam told The Straits Times yesterday.

Those who spread fake news without knowing the truth have nothing to fear. Similarly, a person who starts something based on a misunderstanding will not face penalties, he added.

"There might be one person who deliberately puts the falsehood out, and then there might be thousands who spread it," Mr Shanmugam said in spelling out what behaviour would be targeted by the Protection from Online Falsehoods and Manipulation Act, and how malicious intent would be determined by the police and prosecution.

"The Bill doesn't seek to impose criminal penalties on the thousands who spread the original post, as many people do, without knowing the truth. So, they don't have to be concerned."

Under the draft law, ministers are given powers to order corrections or removals of online falsehoods, and also ask for sites spreading such falsehoods to be blocked, if they harm the public interest.

These decisions can be challenged in court, which will be the final arbiter, if applications to the ministers to vary or cancel the orders are rejected.

Those found guilty of spreading fake news with the malicious intent to harm public interest could face jail terms of up to 10 years.

To determine such intent, Senior Minister of State for Law Edwin Tong said the police will look at objective facts, circumstances and context. If necessary, they will refer the case to the Attorney-General's Chambers, which will decide whether or not to prosecute.

If the case goes to court, the court will then have to decide "beyond any reasonable doubt whether there was a case to be made for this person to have published it with knowledge of falsity, and intention to undermine public interest", said Mr Tong, who is also Senior Minister of State for Health.

At an event organised by the Association of Muslim Lawyers and social enterprise Wise SG yesterday, Singapore Management University law don Eugene Tan asked during a small group session involving Mr Shanmugam as well as 20 lawyers and academics whether the Government could include illustrations relating to the definition of a falsehood.

He said doing so would help to clarify the intention of the Bill.

"We certainly can consider inserting some illustrations into the legislation," replied Mr Shanmugam.

The event, to discuss hate speech and deliberate online falsehoods, included a larger dialogue, attended by about 160 academics, businessmen, students and religious leaders.

He acknowledged that in such circumstances, a simple statement saying that an article in question contains a falsehood "is not going to cut much ice".

If the ministry involved decides to respond, it will have to make a "judgment call" on how much information to put out, he said.

"It must be clear enough so that when people read it, they will say this is obviously true," he said. "If you don't set out enough, then you probably revalidate the original falsehood."

It will be "fast and relatively inexpensive" to challenge decisions taken by the Government to act against online falsehoods under a proposed law, Law and Home Affairs Minister K. Shanmugam said yesterday.

He said the Government is trying to reduce the cost of such appeals "very substantially" and allow individuals to act without employing a lawyer.

"Of course, people can employ lawyers," Mr Shanmugam said in response to a question asked at an event organised by the Association of Muslim Lawyers and social enterprise Wise SG. 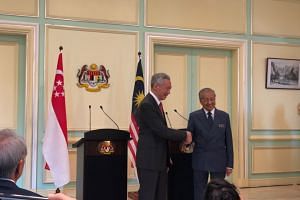 Singapore takes an approach that works for it, PM Lee says on proposed fake news law

"But we want to make the process such that you fill in a form that sets out your position, and we want to try and make it fast and relatively inexpensive."

Tabled in Parliament on April 1, the proposed Protection from Online Falsehoods and Manipulation Act allows for people who disagree with a government decision taken to correct or remove a falsehood to appeal to the courts.

The appeal can be made after applications to the ministers to vary or cancel the orders are rejected. But some have pointed out that the legal route could be a costly means of seeking redress.

On Sunday, Deputy Speaker of Parliament Charles Chong called on the Government to make the appeals process "less onerous".

This would give people the assurance that there are adequate avenues of redress when there is disagreement with the Government's decision, said Mr Chong, who chaired the Select Committee on Deliberate Online Falsehoods last year.

Mr Shanmugam was also asked at the event yesterday if it would be more practical to set up an independent committee to review online falsehoods rather than having government ministers do the job.

He said that unlike ministers, such a committee would not be politically accountable. "If a minister makes a decision, he can be accountable in Parliament," said Mr Shanmugam. "He can be brought to court and he has to justify this decision."

He added that left unchecked, online falsehoods can have serious consequences in the real world. "Ultimately, the Government is responsible. You have got to correct these things and then stand or fall by your decision."

"In its representations to the Select Committee, SPH had proposed, among other things, that it would be preferable for a neutral body to be tasked with adjudicating on whether content was true or otherwise.

"The proposed legislation calls for such decisions on online falsehoods to be made by domain ministers, so that these could be taken with speed to safeguard the public interest.

"SPH accepts that, and also welcomes the move to make appeals against such decisions easier for the public, as this will go a long way towards addressing concerns that have been voiced in some quarters."