Professor Brawn celebrated the official opening of its third and largest outlet yesterday in the heart of the Enabling Village in Lengkok Bahru, in Redhill.

"It is located in the public space, out in the community, and has taken our mandate to create employment for people with autism and expanded it to employ adults with other disabilities," she said.

The Enabling Village is a community and social business hub where several companies hire people with disabilities.

Whereas the other two outlets - both Professor Brawn Cafes - in Raffles Institution and Pathlight School's Campus 1 employ people with autism, the new bistro also counts people with intellectual and hearing disabilities among its 16 staff.

The bistro is the result of an entire community's efforts, said Minister for Social and Family Development Desmond Lee, who was guest of honour at yesterday's opening.

Government-established agency SG Enable facilitated use of the space in the village, ARC provided expertise and support, and corporate partners such as Gong Cha provided job and training opportunities.

Various sponsors, including the Embassy of the United Arab Emirates, donated baking equipment, furniture, edible plants and even the bistro's landscaping design.

Mr Lee said such partnerships between the people, public and private sectors are crucial in helping to create an inclusive society, as the Government does not always have the answers. "I hope that more individuals and businesses will step forward and work with us to achieve our vision of a caring and inclusive society," he said.

Mr Mitchel Wong, who has autism, has been working at the new outlet since last October. As a food runner and busboy, he is fulfilling his dream of working in the food and beverage industry. 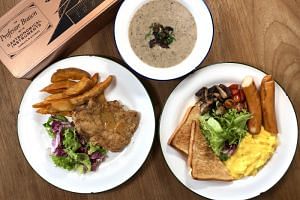 Cafe run by people with special needs opens in RI

He calls this place a second home and says the people he works with feel like his second family.

"I have friendly co-workers and coaches who guide me in my work so that I can do well," said the 23-year-old, who enjoys working also because his salary helps him support his parents and himself.

Such is Professor Brawn's aim: Creating job opportunities for people with disabilities to help them attain financial independence.

"We will help them by continuing to train and hire more special needs youth and adults through this space and our job coaching and support programme," said Ms Jacelyn Lim, deputy executive director of ARC.

Disabilities should not stop people from leading productive lives, she said, adding: "Work is dignity."

ARC also runs the Employability and Employment Centre (E2C), which aims to equip adults who have autism with skills and to place them in suitable jobs with appropriate job support.

Some 275 people with autism have found employment through E2C since its founding in 2012.