President Halimah Yacob has called on bosses to devise a code of practice that will set common standards on the employment of people with disabilities.

These could include initiatives, such as ramp access and modified computers screens.

Madam Halimah told the media at the rehabilitation and respite centre Abilities Beyond Limitations and Expectations (Able) yesterday that such a code could create more jobs for people with disabilities.

While centres such as Able help support physically challenged clients reintegrate into the community and gain employment, a labour market of "demand and supply matched together" can then develop, she noted.

"I hope employers will do their part. Open their doors and be more receptive for people with disabilities to work and earn a living and have self-esteem."

Madam Halimah attended various programmes with Able clients during the one-hour visit, such as a baking class with family caregivers, a speech and language therapy session and rehabilitation therapy. She commended the centre's efforts to help people with disabilities enter the workforce. 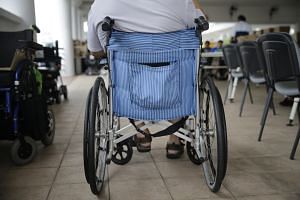 New workgroups to look at how disabled can live independently, improve employability

Mr Ng Beng Chai, 59, has been attending the speech therapy sessions at Able for over a year. He had a stroke in February last year, causing severe aphasia, a language impairment that affects speech.

Ms Evelyn Khoo, Mr Ng's speech therapist, said: "Some (potential employers) don't even look at his abilities and skills. They don't seem to believe that cognitively he is able, when it is really just a language impairment."

Mr Ng, who worked as a heavy vehicle driver for the past 30 years, has been repeatedly denied employment opportunities after his stroke.

He faces challenges dealing with service staff at hawker centres, coffee shops and supermarkets on a daily basis. However, his weekly speech therapy sessions have allowed him to communicate more effectively than before despite his articulation being imprecise.

Ms khoo said: "I hope he is given a chance. I really hope I can help my clients achieve the goals that we set together, be it going to work or even being able to order food independently."

Able served 174 rehabilitation clients between October 2015 and last month, with 44 returning to work.

It received Empowering for Life funding last year and was granted a further two years under the President's Challenge.

The funds will be used for its speech and language therapy programme as subsidies for their clients.

A version of this article appeared in the print edition of The Straits Times on May 29, 2019, with the headline 'President Halimah urges bosses to open doors to people with disabilities'. Subscribe
Topics:
More
Whatsapp Linkedin FB Messenger Telegram Reddit WeChat Pinterest Print Purchase Article Copy permalink