SINGAPORE - Masjid Hajjah Fatimah was a flurry of activity and chatter as President Halimah Yacob joined close to 400 Kampong Glam residents for the breaking of fast at dusk on Tuesday (May 7).

Under the scheme, Muis disburses zakat (tithe) collected from the Muslim community to the needy.

Before the meal, Madam Halimah toured the compounds of the mosque, which was built in 1846.

It was named after Hajjah Fatimah Sulaiman, a renowned businesswoman and philanthropist from Melaka who came to Singapore in the early 1800s.

It is one of the few mosques in Singapore to be named after a woman and was gazetted as a national monument in 1973.

Madam Halimah also visited the mausoleum behind the main prayer hall which houses the tombs of Hajjah Fatimah, her daughter and son-in-law. 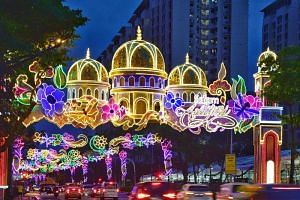 The mosque's architecture comprises a mix of Chinese, Malay and Western elements, from the unique minaret that resembles a church spire to glazed emerald green tiles on the parapet. As the four-level minaret tilts at a six-degree angle, some call it "Singapore's leaning tower".

Throughout the month of Ramadan - which began on Sunday night (May 5) and ends on June 4 - Muslims will observe the fast from dawn to dusk. They will celebrate Hari Raya Puasa to mark the end of the month-long fasting on June 5.

"I'm deeply encouraged by the presence of other interfaith leaders (here) because that shows that the act of breaking fast is a great platform for us to encourage interfaith harmony and cohesion," Madam Halimah told reporters on the sidelines of the event.

She added that Singaporeans must not take cohesion and harmony for granted and must continue to build trust and deepen relationships.

"What we see happening around the world is certainly not encouraging at all. Because of identity politics, people are withdrawing into their own ethnicities and religions. Instead of creating togetherness, they are celebrating separateness, and that is not something that we want in Singapore."