An activity to teach children the concept of sorting objects may seem simple, but it has evolved over the years, reflecting a change in pre-school teaching methods.

In the past, a teacher might have asked children to sort objects according to colours, for instance.

"It's a close-ended question. Not much thinking is needed. Teachers observe if kids can sort the things correctly and whether the aims are met," said Ms Sally Pang, a curriculum manager at Pat's Schoolhouse.

MAKING THEIR OWN MARK

When kids have freedom to explore and negotiate risk, they learn best.

With thepower of sharing through social media, more parents are beginning to see the benefits of play.

But in a similar activity conducted today, a teacher may ask children: "How would you group these objects together?"

Most children typically still sort them by colour, but a few could sort them by size, or other characteristics such as texture.

That goes on to spark conversations about how objects can be grouped differently, and teachers can also learn about the children's different thinking processes.

Over a decade ago, pre-school sessions generally consisted of free play and activities in which teachers have more instructions and more planning was involved.

"Now, there is a greater emphasis on allowing children to explore, while the teacher acts as a facilitator," said Ms Pang, who has been with the pre-school for 17 years. 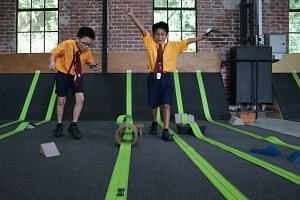 The play's the thing at this centre 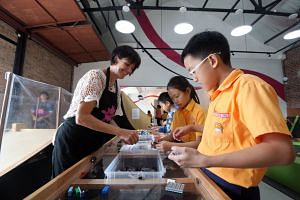 Let kids play to help them succeed in life

Kiddiwinkie Schoolhouse co- founder Julie Koh agreed, saying: "Ten years ago, our children were mostly engaged in independent play within large group settings. There was not much emphasis on the adult's role in supporting children's development through play, and the curriculum was mainly focused on using worksheets where children reflected on what they had learnt on paper."

Research has shown that play in the early years of a child's life can contribute significantly to the child's cognitive, social and emotional development.

So some pre-schools now have not just free and unstructured play but also purposeful play in which teachers guide children to make meaning out of their experiences.

Ms Leanne Sunarya, executive director of pedagogy at EtonHouse International, said: "A teacher's role has become less about conveying knowledge, and more about facilitating time and space for the child to co-create knowledge through their interactions with the environment, people and materials. As the teachers interact with the children, they observe their interactions, and through these... they plan new possibilities to further the children's learning."

For example, when one of the pre-school's teachers noticed that some pupils were interested in the new plants added by a gardener and one of them asked "why do the long bits go into the soil?", the teacher moved beyond just getting children to know the word "roots".

The teacher then set up some plants indoors for the children to observe, make other discoveries and learn other science concepts.

Ms Koh said: "Just as we encourage creativity in children, we also do the same for our teachers. They are strongly encouraged to amend lesson plans to make learning fun and differentiated to suit the needs of the children."

The resources for play have also changed - from commercial toys to more natural elements such as plants, sand or water. These offer many possibilities for children as they play, and allow them to connect more with the natural environment, said experts.

With teachers giving fewer instructions, the distinction between what is play and what is not has become blurred. "There is no clear distinction between the amount of time spent on play against that spent on academics as they are integrated seamlessly," said a spokesman for the Star Learners curriculum team.

Ms Pang said there is greater emphasis on "discarding notions of play time and turning every part of the day into playful time".

Ms Sunarya said: "We need to redefine play from being the adults' misconception of play as what we do when we are not working, to play as the work in childhood."

Dr Geraldine Teo-Zuzarte, head of professional practices at NTUC First Campus, which has been in the childcare sector since 1977, said there were obstacles in the early days because parents were concerned that there were no worksheets for children. "Our philosophy then was considered different from the pedagogical norm."

But many are starting to recognise that play is the best way for children to learn, she said.

Ms Koh agreed, saying: "With the power of sharing through social media, more parents are beginning to see the benefits of play."

Even Prime Minister Lee Hsien Loong emphasised the importance of play in children's early years. During the National Day Rally in 2012, he said: "Please let your children have their childhood... No homework is not a bad thing. It is good for young children to play and to learn through play."

Dr Sky Seah, 42, an assistant professor at a university, has two children at St James' Church Kindergarten. She said: "When kids have freedom to explore and negotiate risk, they learn best. I knew the benefits of play by gut feel initially, and later on, I read research which confirmed that having experiences expands a child's mind."

Moving forward, there are likely to be more discussions on what the right balance is - between the use of technology and sticking to traditional play, and between free play and purposeful play.

Mr Brian Casewell, dean for research and programme development at MindChamps, said one of the biggest innovations in the past few years has been the "carefully balanced integration" of IT in pre-school activities.

MindChamps' e-books, for instance, incorporate songs. These allow for kids' fascination with the screen while helping to enhance their reading skills, he said.

Dr Teo-Zuzarte said that, with the fast-paced advancements in IT, it is becoming more of a struggle to find the right balance "between traditional play and technological play".

Then there is the balance between purposeful and free play. Experts in Finland, for instance, emphasise free play because it nurtures creativity and independence.

Given Singaporean parents' preference for having learning outcomes met, having just free play may still be difficult for many parents to accept.

But until there is more evidence showing the benefits of one play approach over another, some pre-schools are happy to at least have more support and understanding from parents in incorporating play in learning.

Ms Pang said: "We feel more affirmed, without the fear of people asking: 'Why are my kids playing all the time?' "