Those eligible can use gyms during off-peak hours for a year to keep fit, prepare for IPPT

Young men looking to keep fit before entering national service can use the facilities in six Safra gyms for a year without having to pay a cent under a new initiative announced yesterday.

The Pre-Enlistees Exercise Programme for National Service (Prep4NS) will give those eligible access to the gyms during off-peak hours. Registration for the programme, a joint effort by Safra and the Defence Ministry (Mindef), will be offered on a trial basis from next month.

The one-year membership will start once the pre-enlistees' applications are approved.

Senior Minister of State for Defence Mohamad Maliki Osman, who is also president of Safra, announced the initiative on the sidelines of the groundbreaking ceremony for Safra's upcoming clubhouse in Choa Chu Kang Park.

He told reporters that the programme is meant to encourage pre-enlistees to take charge of their fitness and prepare for their Individual Physical Proficiency Test (IPPT).

"(The gyms) will also offer customised group sessions for our pre-enlistees to work together, prepare for their IPPT. We hope they can work out with their friends, improve their fitness level and, hopefully, enjoy the process," added Dr Maliki.

Prep4NS is meant for those who have registered for national service but have yet to enlist, and are assessed to be medically fit to serve, Mindef said in a statement.

More details will be provided on the Safra website from next month.

According to Safra's website, for non-members, an all-day access membership to all EnergyOne gyms costs $963 for 12 months. An off-peak access day pass for a single club costs $577.80 for nine months.

Meanwhile, the 1.4ha, five-storey Safra Choa Chu Kang, slated to be ready in 2022, is expected to draw more than 1.4 million visitors a year when it is open. 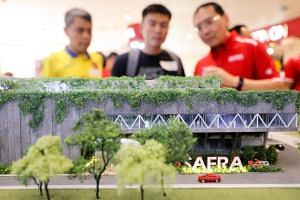 Located within Choa Chu Kang Park and a five-minute walk from Choa Chu Kang MRT station, and with a "Fitness Oasis" theme, Safra's seventh clubhouse will also be the first to have an integrated fitness and wellness hub with a spa and fitness studio.

There will also be an indoor climbing facility and an entertainment hub.

Health Minister Gan Kim Yong, who was the guest of honour at the event, said the Choa Chu Kang area is becoming more well connected, with the opening of the Downtown Line to Bukit Panjang a few years ago, and with a new bus interchange and the Jurong Regional Line in the works.

Mr Gan, who is also MP for Chua Chu Kang GRC, added: "It's important that with the development of this club, we also have to roll out programmes and services to attract family members and NSmen to come and use these facilities."

The clubhouse will also feature a sheltered swimming pool, a sheltered futsal court and a 150m sky running track on the fourth floor.

Operationally ready national serviceman Sze Jun Rong, 32, who has lived in Choa Chu Kang for 30 years, likes that the facilities are sheltered.

"When it rains at other swimming pools, you have to stop the activity. So I think Safra Choa Chu Kang has adopted a very good concept in sheltering the whole place," said the manager at ST Engineering Land Systems.