Semakau Island might be known for being Singapore's only landfill site, but it is also producing 100 per cent clean energy to power a fish farm there.

More than 9,500 sq m of solar panels located there, coupled with a wind turbine, can power up to 350 four-room Housing Board units for a year, with a total output of 1.5MW at peak capacity.

Since the end of February, the deep-sea fish farm owned by Barramundi Asia on the island has been running on 100 per cent clean energy harnessed from different renewable sources with an energy integration system.

Micro-grids are used to generate power in remote areas where it might be difficult to build transmission lines and wires.

The central hub of the Reids system draws energy from the micro-grids, which are powered by various sources such as wind turbines and solar panels, and redistributes any excess energy unused by one micro-grid to another. By integrating multiple renewable energy sources - which are heavily dependent on conditions of nature - the system is able to generate power more consistently.

The first of its kind in South-east Asia, the micro-grid system serves as a platform for companies to test research projects that are powered by renewable sources of energy in real-world conditions. 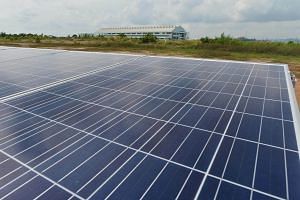 To date, the university has set up partnerships with 30 local and international companies for the Reids project, including British turbine supplier Rolls-Royce, and French corporations Engie and Schneider Electric.

Four out of the eight micro-grids are currently up and running.

Mr Romain Migne, project manager at French electric utility company EDF, which opened its lab on the island five years ago, said Singapore is a suitable location for the company to test its technologies for electric-powered cars in hot and humid conditions - which could be tough for electrical equipment.

"What is really interesting for us here in Singapore is the tropical environment," he said.

"If the batteries work in Singapore, basically they will work everywhere in the world.

"The main driver (for us coming here) was really to have a tough environment to play with, and to toughen our technologies."

Senior Parliamentary Secretary for Trade and Industry Tan Wu Meng, who toured the Reids site yesterday, said that Semakau Island was a "tough environment" for technology because of its remoteness.

But it has been turned into an opportunity in the case of the Reids project, as companies can test their solutions away from built-up areas, added Dr Tan.

Mr Lim Horng Leong, programme manager at NTU's Energy Research Institute, which is running the project, said that several new wind turbines will be added by the end of the year to the existing one on the island.

He added that two tidal generators currently undergoing test runs offshore near St John's Island and Sentosa Island will also be used at the Reids site in future.

A version of this article appeared in the print edition of The Straits Times on May 11, 2019, with the headline 'Powering up clean energy on Semakau'. Subscribe
Topics:
More
Whatsapp Linkedin FB Messenger Telegram Reddit WeChat Pinterest Print Purchase Article Copy permalink