SingPost has dismissed one of its postmen after he was spotted discarding returned letters and direct mail, the company told The Sunday Times yesterday.

A video that had gone viral shows the postman being confronted by a member of the public, who also took a video of what happened.

A SingPost spokesman said the incident occurred at a condominium last Wednesday. "His action is a serious failure of duty. We do not condone this and he has since been dismissed," he added.

SingPost also thanked the member of the public for bringing the incident to its attention.

"We would like to apologise to the residents of the estate for the service lapse," said the spokesman. "We have since retrieved the mail and will be processing them."

In the clip, the video taker is seen confronting the postman, saying in Mandarin: "To you, this is just a piece of paper. But to me, it's very important."

The postman replies in Mandarin: "If I say it, you may not even believe me. I came to Singapore from China. I'll tell you about a real problem. It's not that we want to throw it away or are irresponsible. I have over 2,600 letterboxes (to cover)... every day. Actually I wanted to go and see a doctor today as my leg hurts."

Singpost postman caught throwing away 100s of letters! This is why you encounter lost mails!

The video taker retorts: "So you threw this stack of beautiful letters into the rubbish bin."

The postman eventually apologises to the man. 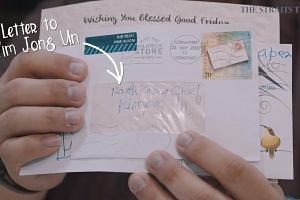 You've got mail... but it's lost in transit: SingPost tells you why

SingPost said the company will be looking into the postman's claims about the work environment, "but it does not excuse his actions" and neither does it change the decision to dismiss him.

On average, 4,000 pieces of mail end up at SingPost's Returned Letters Unit every day, according to a report last year. Only about 300 items are eventually traced and returned.

Many of the items that pass through the unit are letters and packages with no stamps, illegible handwriting, incomplete addresses or addressed to places that no longer exist.

According to SingPost's website, ordinary mail is not tracked and not traceable. As for registered articles, SingPost had previously said one in 500,000 goes missing.

Last July, SingPost took action against a postman who left a bundle of mail at a Jurong East void deck while on his delivery rounds.