Ben Goi had been keen to mark his child's first birthday this weekend, says his sister

This was confirmed by Ms Goi Lan Ling, the younger of Mr Ben Goi's two older sisters, when she spoke to Chinese-language evening daily Shin Min Daily News at his wake on Tuesday afternoon.

Ms Goi told Shin Min that Mr Goi had gone to Kuala Lumpur about a week earlier with his wife, son and maid to visit his wife's family for Chinese New Year.

They were due to return to Singapore on Sunday afternoon.

Last Saturday night, Mr Goi made a video call to Ms Goi and other family members in Singapore and shared with them pictures of the Chinese New Year decorations in the Malaysian capital.

"We talked happily, and he looked normal," said Ms Goi.

However, Mr Goi suffered from an intense headache later that night, and he asked his wife to call an ambulance.

They waited for a public ambulance, but later called a private one.

After being taken to hospital, the doctors worked to save him, but he died at 4am on Sunday, said Ms Goi.

The name of the hospital was not revealed in Shin Min's report.

Ms Goi added that at about 3am on Sunday, Ms Lee had called Mr Goi's family to notify them of the situation.

Mr Goi's parents took the earliest flight they could to reach the hospital, but were unable to see him alive for the last time.

The older Mr Goi said he hoped that when he woke up, he would find that it had all been a bad dream.

"I have lost my beloved son. This is a pain in my heart that will never be able to heal," he said, with tears in his eyes.

"No one could have expected this to happen. It can't be blamed on anyone. This is just his fate then," he said.

The older Mr Goi said his son was obedient and filial, as well as humble, generous and friendly. 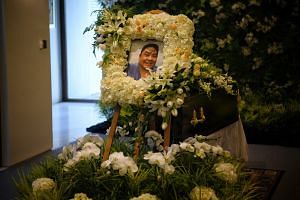 Ms Goi said Mr Ben Goi and his family had planned to return to Singapore on Sunday afternoon, ahead of their reunion dinner on Monday and other Chinese New Year festivities.

She said her brother had high blood pressure and hereditary asthma, but did not have issues with day-to-day activities.

She also told Shin Min that he had been looking forward to celebrating his son's first birthday this Saturday.

She added that as things had happened so unexpectedly, Ms Lee had been quite emotional, so the whole family had been helping to take care of the baby.