Coral reefs are the world's underwater gardens and guardians of life. But, as oceans warm and become more acidic due to climate change, these important habitats are at risk. The good news is that nature is resilient. New scientific research has uncovered more information about coral reefs, which could help in their conservation. The Straits Times takes a look at the links between climate change and coral reefs.

Murky waters full of sediment may make it difficult for scuba divers to explore under water, but they have a far more ominous impact on marine life.

Corals, in particular, are exceptionally vulnerable. As well as grappling with the effects of climate change, sedimentation caused by land reclamation or pollution is also posing a challenge.

Sunlight does not penetrate sedimented waters as well as in clear waters. This affects the photosynthetic ability of the microalgae living in the coral to produce food, which nourishes the host. 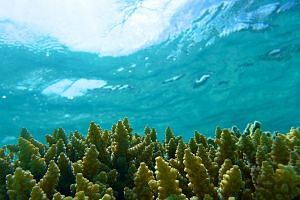 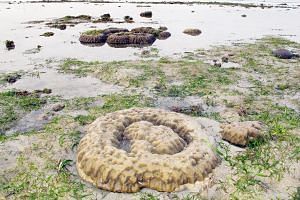 Singapore ready to deal with threat to corals

High levels of sediment in the water can also physically smother corals and affect their reproduction.

The fertilised egg, or larva, is released into the water column and carried to another part of the ocean, where it starts developing new colonies. But sediment collecting in coral crevices could prevent the larva from being dislodged or hinder its development.

Nature, however, is resilient.

Scientists from the National University of Singapore's Tropical Marine Science Institute (TMSI) have discovered an encouraging adaptation in the native blue coral Heliopora coerulea that seems to help it thrive in sedimented waters.

During brooding, the female Heliopora coerulea holds a fertilised egg using feathery tentacles. The inflated tentacles help to elevate the larvae above the sediment layer that has accumulated on the colonies.

"The inflated polyps protrude from accumulated sediment in the colony crevices, thus raising the brooded larvae above the layers," said Dr Toh Tai Chong, 31, a research fellow at TMSI who led the project.

The discovery was recently published in science journal Marine And Freshwater Behavior And Physiology.

Dr Toh and Mr Lionel Ng, a research assistant at TMSI, were conducting coral reef surveys at the offshore islands south of Singapore in April 2014 as part of a study to assess the effectiveness of reef rehabilitation efforts here when they noticed a patch of white while swimming over some Heliopora coerulea corals.

"It looked like a dense white mat was laid over the corals," said Mr Ng, 32.

The researchers believe their findings could help with the conservation of Heliopora coerulea, which is listed by the International Union for Conservation of Nature as being vulnerable to extinction.

"We have a lot more broadcast spawners than brooders, and little is known about the reproductive biology of Heliopora coerulea," said Dr Toh.

The United States National Oceanic and Atmospheric Administration estimates that while three-quarters of stony corals are broadcast spawners, the remaining quarter of coral species are brooders.

"Since the Heliopora coerulea broods only once a year around April, this discovery enhances our existing knowledge on the biology of reef organisms, which could help us better manage the areas they are found in to reduce disturbance and further sedimentation during the reproductive season," said Mr Ng.

Dr Toh also pointed out that since sedimentation affects all types of coral, further research could look into the different adaptation strategies to improve our understanding of how Singapore's reefs remain resilient.

This also facilitates the conservation of more vulnerable species through measures such as artificial propagation to reduce the risks of local extinction.

Dr Karenne Tun, deputy director of the coastal and marine division at the National Parks Board's (NParks) National Biodiversity Centre, said coral reefs will ensure the availability of marine-based resources, such as food and breeding spaces, and continue to support the ecosystem's resilience to a changing climate.

"NParks continually works with various coral reef researchers (here) to increase our knowledge of Singapore's coral reefs and develop better management strategies of coral reefs through our targeted conservation programmes, such as the setting up of the coral nursery and the initiation of a coral bleaching monitoring programme."