SINGAPORE - Police shot a wild boar that was rampaging on a road in Punggol on Tuesday night (Nov 21).

It was later euthanised due to injuries sustained by the shot fired.

In a statement, the police said they were alerted at 7.08pm to an accident involving a wild boar and a car on Punggol West Flyover.

The injured wild boar was lying on the road when policemen and members of wildlife rescue group Acres arrived at the location.

The wild boar got up and charged towards the officers and passers-by in the area.

The policemen fired their tasers at the boar, but it continued to charge towards them and the public.

"As the wild boar was rampaging and was a danger to the people within the vicinity, an officer had to draw his revolver to fire a shot at it, to stop it from injuring anyone," said the police.

The tusked wild boar, which measured 1.5m from head to tail, was shot in the neck. It was handed over to Acres, who had to put it to sleep due to its injuries from the gunshot. 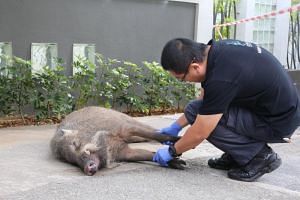 No one was injured in the incident.

Acres deputy chief executive Kalai Vanan told The Straits Times: "We have assessed this particular case and it is a very unfortunate situation where the boar most certainly became very stressed due to injuries sustained from its collision with a vehicle. The poor animal probably found itself cornered and became defensive."

Wild animals in general are shy animals who usually move away when sighted, said Mr Kalai.

"However in this situation, the cramped area with high human traffic stressed the boar," he said, adding that the public should never approach wild animals and should give them space when in their presence.

The Agri-Food & Veterinary Authority (AVA) said in a Facebook post on Tuesday night that it will monitor the situation at the Punggol area closely and continue to work with the relevant stakeholders, such as Acres, Wildlife Reserves Singapore, NParks and the National University of Singapore, to manage the wild boars so as to ensure public safety.

"We are exploring various measures, such as erecting barriers to prevent wildlife from encroaching onto roads, and putting up signage about wildlife crossings at specific locations to warn motorists," it added.

The boar had been spotted by motorists and passers-by alike, who commented about it on social media.

Facebook user Abang Pete said in a post at 7.38pm that he was driving at Sengkang East Road when he saw something he thought was a black plastic bag on the road and steered to avoid it.

"I was shocked to see it struggling and kicking away," he wrote. "When my headlights shone on the poor thing, I realised that it was a huge wild boar, possibly hit by a passing vehicle."

This is the latest in a string of wild boar incidents in recent months.

Last month, a man was injured after a wild boar charged at him outside a condominium at 25, Hillview Avenue.

In September, a motorcyclist and his pillion rider were taken to hospital after a wild boar appeared suddenly on the Ayer Rajah Expressway after the Tuas Checkpoint.