SINGAPORE - The floating sea barriers being installed off Singapore's coasts are part of critical measures to secure the nation's coasts, the police said, following complaints of noise by Sentosa Cove residents.

The barriers help deter and delay potential intrusions by high speed craft and illegal immigrants, a spokesman for the Police Coast Guard (PCG) told The Straits Times on Thursday (Jan 23).

Noting that the PCG's main priority is to ensure the security of the coast, Superintendent Wilbur Sim, head of operations and security for the PCG, said the barriers are part of a slew of deterrence measures in place.

Apart from physical barriers, the police coast guard also have surveillance capabilities like cameras and unmanned aerial vehicles, and patrol vessels that can swiftly respond to threats.

Supt Sim said the floating barriers have proved to be effective, citing an incident reported last week in which the police arrested three foreigners for attempting to enter Singapore illegally by boat off the coast of Changi.

"Those floating sea barriers effectively deterred and delayed (them), so much so that our coast guard's patrol boats were able to respond swiftly and effectively, apprehending the three illegal immigrants," said Supt Sim.

Besides Sentosa Cove, the floating sea barriers have also been installed in the waters off East Coast and Punggol, said Supt Sim.

The PCG has also installed land-based and sea-based fencing and caged up some canals around the nation's coasts.

The floating sea barriers have been progressively installed around Singapore's coast from 2014, said Supt Sim. The barriers around Sentosa Cove were a recent addition, with installation works beginning last month and expected to complete by March this year.

They have triggered numerous complaints of constant din by Sentosa Cove residents.

Resident Alec Wing said noise was generated in two ways, by the clinking of metal chains and the thumping that ensues when waves hit the barrels. 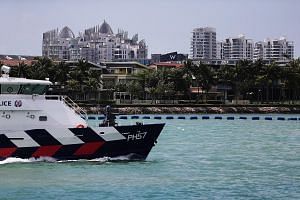 "Noise is amplified at night, especially when (residents) are trying to sleep, so it causes a lot of disruption, like insomnia," said Mr Wing, an IT consultant who declined to reveal his age.

The residents and the PCG had a meeting on the matter last Saturday.

Supt Sim told The Straits Times the PCG had engaged with stakeholders prior to the installation of the floating sea barriers which were deemed the most suitable for use.

The police consulted with the Sentosa Cove Resort Management (SCRM), Sentosa Development Corporation, the National Parks Board, and the Maritime and Port Authority of Singapore, to take into consideration diverse requirements like navigational safety, environmental protection and space required for water recreational activities.

In February last year, the SCRM had also invited the PCG to brief the Sentosa Cove Owners Committee on the installation of the barriers.

Updates from the briefing were subsequently made available on a portal managed by SCRM that is accessible by all property owners, the police said.

Supt Sim added:"Taking into consideration their feedback and the terrain considerations, we found that the sea barriers were the most practical and pragmatic way of safeguarding that portion of the coastline," said Supt Sim.

He also noted the feedback from residents.

"They should rest assured that any feedback raised will be brought to our attention and we'll work on a solution to deal with these issues," said Supt Sim.