SINGAPORE - Bicycle-sharing company ofo has lodge a police report over a video of a teenager throwing and stomping on one of its bikes in the Geylang Bahru area.

The act of vandalism was filmed and the video first tweeted by user @hxngwei on Monday (April 17) morning.

It has since been shared widely on Facebook, drawing condemnation from netizens.

The video shows the unidentified teenage lifting the yellow-coloured bike up before throwing it. He then stomps on it several times.

In a Facebook post on Tuesday evening, ofo - which is headquartered in Beijing - said it had noted several incidents where its bikes were misused.

It also shared a photo of the police report it lodged. The report stated that ofo had yet to identify the bike's serial number and thus was unable to assess the damage done to it.

"While we trust our users with full heart and will continue providing the best quality bike-sharing convenience, we would not hesitate to report to police or take legal action against vandalism," the post added.

"We invite all warm-hearted users to report damaging behaviour to report-sg@ofo.so." 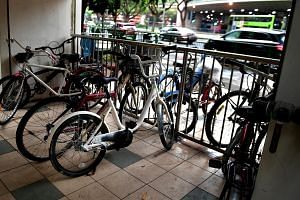 The cost of renting an ofo bike is 50 cents per trip.

ofo, which started its operations here in February with a fleet of about 1,000 bikes in areas such as Punggol, West Coast Park and the city area, is one of three firms vying for a slice of the bicycle-sharing market in Singapore.

The other two are Singapore-based start-up Obike and China outfit Mobike.

While the trio's emergence had prompted the Government to scrap its plans for a national bike-sharing scheme last month, there have been reports of errant users resorting to extreme methods to make the bikes available solely for their personal use.

Photos of bikes belonging to the companies chained up or stashed outside HDB flats have made the rounds online.