In an advisory posted on the Hougang NPC's Facebook page, the police said they had been observing groups of players gathering at the vicinity of Neighbourhood 4 and Punggol Park.

"As there were instances of public crossing roads (while chasing after Pokemon that appeared in their vicinity) without due regard for their own safety, we urge all to practise road safety i.e. ensure personal safety as well as the safety of other road users too," the post said.

It also urged players to reduce noise levels at night, dispose of their trash in garbage bins and to make sure the area was clean for residents staying in the area.

Block 401 at Hougang Avenue 10 and the nearby Punggol Park have been hugely popular with Pokemon Go players since the game was launched in Singapore on Aug 6, as several rare Pokemon such as Gyarados and Snorlax have been spotted there.

The area also has a cluster of three PokeStops, locations where players can get virtual items and place "lures", which attract more Pokemon. 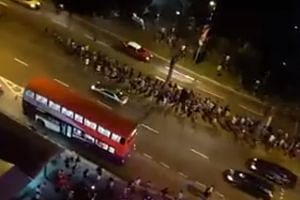 But there has been backlash from residents living in the area, who are irked by late-night gatherings and the rubbish left behind by the hundreds of players after they disperse.

Police officers have since been spotted patrolling the area frequently at night.

Videos have also emerged on social media, showing how players would dash across roads, apparently without regard for oncoming traffic.

A video sent in by Straits Times reader Bava Na via Facebook showed hundreds of players doing just that as they raced to catch the virtual creatures.

In an earlier advisory issued hours after the launch of the game in Singapore, the police had already warned the public to always place their personal safety above "catch em all".

"Watch where you are walking, be aware of your surroundings and do not walk out into roads without looking," it said then.