But as investigations are ongoing, he was not able to provide further comments on the matter, said Mr Shanmugam in a written parliamentary reply.

He was responding to a question by Workers' Party Non-Constituency MP Dennis Tan, who had asked whether the former directors and management of oBike Singapore would be investigated by the Commercial Affairs Department for any alleged improper transfer of funds to oBike Hong Kong.

The pre-payment, purportedly for the supply of bicycles, had not been returned at the time, and FTI Consulting said that letters of demands would be issued to oBike Hong Kong and its founder Shi Yi.

On Aug 1, Mr Joshua James Taylor, FTI Consulting's senior managing director, told reporters: "What we have found...is that the deposit holders' money came into the Singapore bank account and thereafter was transferred to oBike Hong Kong.

"What we've seen in the accounts and what they have done is netted off the two amounts to say nothing's owed." 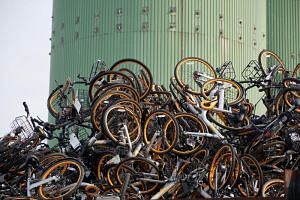 Mr Taylor added that this was "not appropriate" and FTI Consulting would be looking at unwinding this transaction, to show that money is being owed to oBike Singapore and has to be paid back.

Besides the $10 million transferred to Hong Kong, the remaining $1.7 million was used to refund customer deposits and for other operational expenses, Mr Taylor added.

The Chinese-founded company, which started operations in Singapore in January 2017, chalked up losses of $4.25 million in the financial year ending Dec 31, 2017.