SINGAPORE - The police on Wednesday night (Feb 7) clarified claims made by a Facebook user alleging that a police officer and a Hindu Endowments Board (HEB) official disrupted a group's kavadi procession during Thaipusam.

In a statement to clarify the matter, police said they are aware of the incident, which took place last Wednesday (Jan 31) at about 4am.

"Some participants in a group of about 16 were singing, amplified through portable loudspeakers and playing musical instruments," police said.

An HEB official advised them to stop as it was not permitted under the Thaipusam permit conditions.

However, one of the participants challenged the HEB official by claiming that what they were playing were not musical instruments, said police.

The group eventually complied and continued with the procession.

But at around 4.30am at Selegie Road, near the Selegie Housing Board estate, the same group resumed singing and used portable loudspeakers to amplify the singing.

"HEB officials and police officers engaged the group a second time, and advised them to lower the volume," police said, adding that they had received a noise disturbance complaint related to the Thaipusam procession earlier in the night.

Each of the two engagements with the group was no longer than 10 minutes, police added. 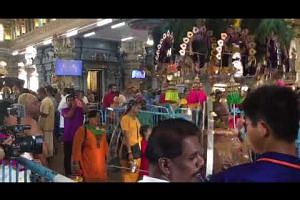 Up to 40,000 people at Thaipusam procession ahead of total lunar eclipse

In Monday's Facebook post, Mr Pradeep Thana claimed the police officer and HEB staff member took videos of every person in the group and followed them for "a good 30 minutes". Police denied these allegations, calling them "patently untrue".

"Police officers and HEB officials were accommodative during the engagements despite the group having broken the law and challenging them," police added in their statement.

The restriction on playing musical instruments along the Thaipusam procession route was introduced in 1973. It was relaxed in 2011 and devotees are allowed to sing religious hymns along the route if no amplification devices are used.

This year's route had devotees walking from Sri Srinivasa Perumal Temple in Serangoon Road to Sri Thendayuthapani Temple in Tank Road, about 3km away.

HEB chief executive Raja Segar apologised to Mr Pradeep for the distress caused to his group in a Facebook reply on Tuesday (Feb 6). He urged affected individuals to reach out to the board, and asked for comments to be "reserved until (they) find resolution".