SINGAPORE - As a friend of both America and China, Singapore can be put in a difficult situation if there is friction between the two giants, Prime Minister Lee Hsien Loong said in an interview with British broadcaster BBC aired on Wednesday (March 1).

He made the point when presenter Stephen Sackur asked about rising tensions in the region and perceived Chinese unhappiness over Singapore's ties with America.

Mr Lee said: "If America-China relations become very difficult, our position becomes tougher. Because then we will be coerced to choose between being friends with America, and friends with China.

"That is the real worry."

He was speaking on the BBC's HARDtalk interview programme, during which he was also asked about the international political climate, freedom of expression and press freedoms as well as Singapore's law criminalising gay sex. 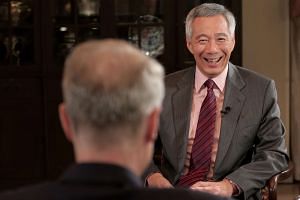 PM Lee on BBC's Hardtalk: Most would back retaining Section 377A if a referendum was held

On United States-China ties, he added: "Right now we are friends with both. Not that we do not have issues with either, but we are generally friends with both, and the relationships are in good working order."

Mr Sackur, however, noted that with the US, there are problems, including President Donald Trump's antipathy towards global trade. He asked Mr Lee if the Trump administration's move to withdraw from the multilateral Trans-Pacific Partnership trade pact had caused Singapore to review whether the US "has its back".

Mr Lee replied that everyone in the region, Singapore included, was watching the US very carefully.

"We have a very deep relationship with the United States. They are our biggest investor. They are one of our major export markets," he said in the interview.

Both countries also cooperate in defence, security and counterterrorism, and Americans are very welcome in Singapore and Singaporeans feel very comfortable in America.

But Singapore would have to watch America's direction and political tone, as well as what its government does, noted Mr Lee.

He also said: "I do not believe the administration is planning to pull back from Asia or to pull back from the world. On the contrary (Mr Donald Trump) has said he wants a muscular engagement and we will have to see what that means."

Turning to uncertainty in Singapore's relationship with China, Mr Sackur brought up Hong Kong's seizure of nine Singapore Armed Forces Terrex infantry carriers on their way back from a military exercise in Taiwan last December.

Mr Lee said: "I would not say we have major problems. We have had some issues and some incidents. The military vehicles were an incident which happened to both of us and we had to handle it."

Asked if it suggested a lack of trust between both countries, Mr Lee said: "It was a delicate matter for both sides and I think both sides handled it carefully and there has been a satisfactory outcome."

He said the tribunal had made a strong statement, but stressed Singapore does not judge specific claims and respects international courts.

Mr Sackur suggested that Singapore's position on the case could be viewed by Beijing as a betrayal of friendship. Furthermore, Singapore had in 2015 allowed America to deploy Poseidon surveillance planes on its territory, he noted.

Mr Lee said Singapore has had this relationship with the US for a long time.

It buys military equipment from the superpower and its air force trains on American soil.

Singapore has also hosted American aircraft and ships which pass through and stop here.

Mr Lee said Singapore does all this because it believes America's presence in the region has brought about stability and enabled countries to prosper.

But Beijing-Washington relations require close and sustained attention on both sides, he noted.

While China is paying attention to the relationship, Mr Lee said America has many other issues to worry about.

"It is not just a matter of making strong statements. You have to... communicate convincingly and to a certain degree, openly with the other side, and develop that strategic understanding so that there is no miscalculation," he added.

He was also asked about a free trade deal with the United Kingdom, and Mr Lee said Singapore would be willing and happy to negotiate one when Britain is ready.

Asked about remarks by Liberal Democrat party leader Tim Farron that PM Theresa May had to raise issues of freedom of expression and of the press in trade talks with Singapore, Mr Lee responded: "I do not see you being restrained in asking me any questions".

"We are completely open; we have one of the fastest internet accesses in the world; we have no great wall of the Internet. Where is the restriction?", he added.