In his letters dated Wednesday (Nov 9), PM Lee said he looks forward to working with them and invited Mr Trump to visit Singapore "at (his) earliest convenience".

In his letter to Mr Trump, PM Lee highlighted that both countries have shared a partnership that has ensured peace and stability in the Asia-Pacific region, and hopes to strengthen bilateral and regional ties.

He added that economic ties between the two countries have also created 240,000 jobs for Americans, and that Mr Trump's "extensive business experience sets (him) in a unique position to tap into Asia's growth".

Please accept my warmest congratulations on your election as the 45th President of the United States of America.

The American people have elected you at a time when the United States is facing many challenges. I offer my best wishes as you lead your country forward and build a better future for the American people.

Singapore and the United States share strategic interests and an excellent, longstanding partnership. We have long supported America's presence in the region, which has underwritten regional peace and stability for decades, and enabled the Asia-Pacific to grow and prosper. 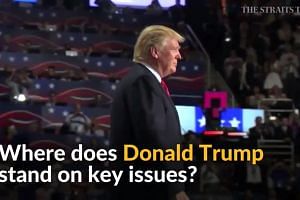 Our two countries enjoy substantive and multifaceted cooperation across the economic, defence and security fields, underpinned by a Strategic Framework Agreement and an Enhanced Defence Cooperation Agreement. We are collaborating to tackle emerging threats in cyberspace and to counter terrorism and violent extremism.

On the economic front, the United States-Singapore Free Trade Agreement has doubled trade between our countries to reach US$64 billion over the last decade. The United States has consistently maintained a trade surplus, which now stands at almost US$20 billion. Investments by Singapore companies in the United States, combined with America's exports to Singapore, have created some 240,000 jobs for American workers. Your extensive business experience sets you in a unique position to tap into Asia's growth.

I look forward to working with you and your Administration to further enhance our bilateral partnership and strengthen the United States' engagement in the Asia-Pacific for years to come.

I wish you every success in your new appointment and hope to welcome you to Singapore at your earliest convenience.

Congratulations on your election as the 48th Vice President of the United States of America.

This was a hard-earned victory. You fought a spirited campaign, and convinced voters to give you the opportunity to implement your policy agenda.

Singapore and the United States enjoy excellent relations, underpinned by a Strategic Framework Agreement on security cooperation and the United States-Singapore Free Trade Agreement, which have been mutually beneficial and advanced our shared strategic interests. We have also strengthened our enduring friendship over the last half-century and expanded cooperation on many regional and international issues.

I look forward to working with you and President-elect Donald Trump to further enhance our bilateral relationship and cooperation on our shared interests in Asia and beyond.