The event also featured a family carnival with game booths and performances.

PM Lee opened a new sheltered linkway that will allow residents of the Fern Spring and Fern View estates bounded by Fernvale Lane and Fernvale Road to access the nearby bus stop along Yio Chu Kang Road.

It links the third storey of the multi-storey carpark at Block 404 Fernvale Lane to the bus stop.

Mr Gan, who oversees the Sengkang South division, said the linkway project was a community initiative mooted last year by grassroots leaders, who raised about $388,000 to build it. The linkway was completed just last week.

As most of the housing blocks are built on a slope, residents in the past would have to walk up a 40-step staircase from the ground floor of the carpark to reach the top of the slope, where the bus stop is located .

With the linkway, they can just take the lift to the third storey of the adjacent carpark and get to the bus stop without climbing the stairs.

"This is part of plans to make the neighbourhood more accessible for elderly residents and families with young children in prams," said Mr Gan. There are about 1,600 households in the Fern Spring and Fern View estates.

"Walking up the stairs is very tiring for older people like us and residents have been complaining about this for the past four years or so. Now it'll be easier to get to the bus stop when I go to Chinatown to do some errands, or when I visit my relatives," she said. 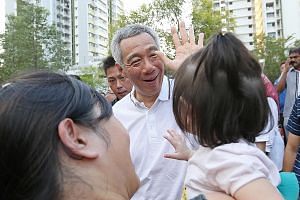 Fernvale Community Club to be completed by 2020

A coconut tree first planted by the late founding prime minister Lee Kuan Yew in 1990 was also transplanted to the open space as its former site would be affected by construction work for the Cantonment MRT station on the Circle Line.

Ms Indranee said the tree planting tradition, started by Mr Lee in 1963 to create a greener Singapore, has taken on added significance in view of climate change.

Just last month, a report published by the United Nations Intergovernmental Panel on Climate Change showed that the world has to take radical action to avert climate calamity.

She said: "Today's occasion reminds the current generation and future generations of the importance of keeping the planet green. Planting more trees helps the earth to breathe, (and) that's what we want to do."