In a post on Thursday afternoon, Mr Lee said he had just returned to Singapore and was "surprised" to find that his page had gathered more than a million likes.

"Thank you all for following my page. I enjoy your comments - it is a fun way to keep in touch with all of you," he wrote.

"Do come back to visit often and I look forward to hearing from you again."

Mr Lee's page was launched in April 2012 and took just under a year to double the number of likes, having hit the half a million mark on Feb 28 last year.

It has since surpassed the Facebook pages of several world leaders such as British Prime Minister David Cameron (978,000 likes) and French President Francois Hollande (820,000).

Mr Lee's posts are a mix of serious messages and light-hearted entries, such as how a barn owl visited his Istana office twice, and a jump shot he pulled off with several Nanyang Technological University students. He has also impressed with his eye for a good photograph.

Over the past week, he has been providing daily updates about his working visit to California where he met tech titans such as Facebook's Mark Zuckerberg and Apple's Time Cook, and attended the first US-Asean summit hosted by President Barack Obama. 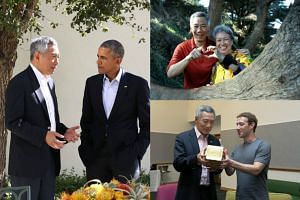 From breakfast at farmer's market to summit at Sunnylands: Highlights of PM Lee Hsien Loong's US trip

Mr Lee made his maiden Facebook post on April 20, 2012, when he expressed his hope that Singaporeans would find his page "interesting".

Highlighting how social media had changed the way people now connect with one another, he wrote then: "Many of my colleagues have been using social media, including Facebook. They have encouraged me to start my own Facebook page. Having watched them, I have decided to join the fun."