SINGAPORE - Two ships in the Singapore Strait were attacked by pirates within the span of an hour in the wee hours of Sunday (Feb 9) morning.

Some engine spares were stolen in one incident, while the perpetrators left empty handed in the other, said the Regional Cooperation Agreement on Combating Piracy and Armed Robbery against Ships in Asia (ReCAAP) Information Sharing Centre in a media release.

These bring the total number of incidents reported in the Singapore Strait since the start of this year to six.

Piracy has been a hot issue recently, with a total of 31 incidents reported in the Singapore Strait last year. The issue was addressed by Defence Minister Ng Eng Hen and Transport Minister Khaw Boon Wan last week, after three MPs filed parliamentary questions about it.

The incidents on Sunday morning both took place in the eastbound lane of the Singapore Strait.

At around 2.20am, bulk carrier New Spirit was passing nearby Nongsa Point, Indonesia, when six attackers armed with knives entered the engine room. They fled when they saw the ship's crew.

The incident was reported to the Singapore authorities and the vessel headed to Singapore where the Police Coast Guard boarded the ship to conduct a further search. No perpetrators were found and nothing was reported stolen.

In the second incident, the tanker Swarna Jayanti was also passing nearby Nongsa Point at about 2.52am, when the crew spotted an intruder in the engine room.

The ship master raised the alarm, gathered the crew and conducted a search for the intruder. 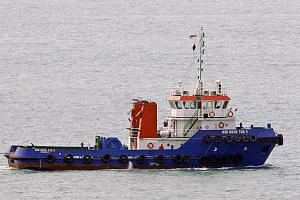 Tanker in Singapore Strait boarded by pirates on Christmas Day, 6th incident in as many days

While no one on the crew was injured, some valves were stolen from the engine room.

The ReCAAP ISC said it is "concerned with the continued occurrence of incidents in the Singapore Strait and the persistence of the perpetrators in their attempts to board ships".

It warned of the possibility of further incidents in the waterway, since the perpetrators of previous incidents have not been arrested.

"All ships are strongly advised to exercise utmost vigilance, adopt extra precautionary measures and report all incidents immediately to the nearest coastal State."

The Singapore-based organisation repeated its recommendations that law enforcement agencies of the littoral states to step up surveillance, increase patrols and enhance cooperation and coordination among them, in order to respond promptly to incidents.