As of Thursday, Pink Dot had received sponsorship dollars from 103 Singapore firms spanning industries from food and beverage, to film, healthcare and engineering.

A campaign to raise funds for the event from local companies, called Red Dot for Pink Dot, was started on March 26. The Sunday Times reported then that about 50 companies had already signed up through word of mouth, overturning conventional wisdom that Singapore companies are leery of being associated with the movement.

It prompted Home Affairs Minister K. Shanmugam to say last month: "Why don't we have confidence that our people can organise and take part in civic activities?"

Pink Dot's call for local sponsors started because the Government made clear last year that events held at the Speakers' Corner cannot have foreign involvement.

Previous iterations of Pink Dot - now in its ninth year - relied mostly on foreign dollars from multinational firms such as Google, Twitter, Facebook, Barclays and Goldman Sachs. Only five of 18 sponsors last year were local. 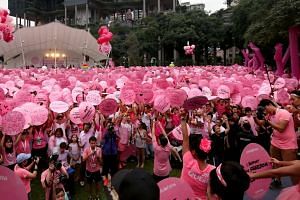 Singaporeans can fight a cause without foreign aid: Shanmugam 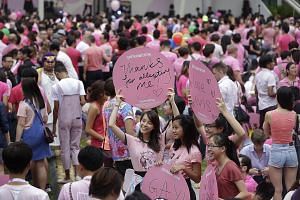 Then, in October, the Ministry of Home Affairs reiterated that only local entities can sponsor, promote or get its employees to participate in events at the Speakers' Corner.

It defined what "local" companies are: they need to be incorporated or registered here, and be majority-controlled by Singaporeans.

One of the sponsors, chocolatier Demochoco, crowdfunded its $5,000 pledge to Pink Dot.

"I wanted to involve the broader community so more people can play a part in this. That I raised money so quickly shows that Singaporeans do support Pink Dot," he said.

Pink Dot falls on July 1 at the Speakers' Corner this year. The fundraising campaign will continue till the end of May.

"It really does show that Singaporean companies are more than ready and willing to put their money where their hearts lie, towards building an inclusive and diverse Singapore for all."