The pig-themed lanterns in Chinatown will be lit on Jan 20 as planned, despite criticisms from some quarters, and will usher in the Year of the Pig.

The lanterns are in the shape of a family of eight pigs - the tallest of which is 12m high.

The centrepiece of this year's Chinese New Year lantern display, the pigs are perched on top of a lantern depicting a bulging purse overflowing with gold coins.

The full display will run 600m along New Bridge Road and Eu Tong Sen Street, and 255m along South Bridge Road. This is the biggest lantern display in the history of Chinatown's Chinese New Year light-ups.

Some people had pointed out that the massive pig lanterns look more "dirty" than festive. Since the lanterns were seen in their entirety last week, some netizens have also called the family of pigs "slightly bleary-eyed" and "scary".

MP Lily Neo said that while organisers of the Chinese New Year festival in Chinatown have welcomed the feedback, the pigs' appearance is unavoidable, as the large-scale lanterns are made from wires, which can be seen in the daylight. 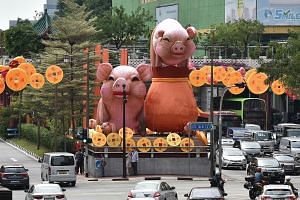 9.5m-tall lantern to usher in the Year of the Pig

Speaking yesterday at a preview of the light-up, Dr Neo, MP for Jalan Besar GRC and adviser to Kreta Ayer-Kim Seng grassroots organisations, said the structures will look better lit at night.

"The lanterns have to last for a month, so we use wires, so they will stand up, and a hardy silk covering so the pigs will look natural and lifelike," she explained.

Dr Neo added that students from the Singapore University of Technology and Design (SUTD), who designed the lanterns, did their best to make the display attractive.

This is the eighth year that SUTD has been involved in the light-up.

"We volunteered ourselves for this extracurricular project, so we could have our designs come to life. But we will learn from this and make the next lanterns more welcoming, especially after we received feedback that the lanterns for last year's dog-themed celebrations looked too fierce," said Mr Ho Zhi Yuan, 23, a third-year student at SUTD and supervisor of the lantern-design team, which included 11 students who worked alongside 42 professional craftsmen. Other festive events taking place during the Chinese New Year period include a street bazaar (along Pagoda Street, Smith Street, Temple Street and Trengganu Street) from Jan 18 to Feb 4.

There will also be traditional Cantonese opera performances at the newly-revamped Kreta Ayer People's Theatre, and a Chinese New Year countdown party on Feb 4, from 9.30pm to 12.30am, that will include firecrackers and a fireworks display.

A version of this article appeared in the print edition of The Straits Times on January 16, 2019, with the headline 'Pigs ham it up for some festive fun in Chinatown'. Subscribe
Topics:
More
Whatsapp Linkedin FB Messenger Telegram Reddit WeChat Pinterest Print Purchase Article Copy permalink