SINGAPORE - Pest control workers who were called in to remove a 3m-long python outside Tang Plaza in Orchard Road last month had not mishandled the reptile, said the Agri-Food and Veterinary Authority (AVA).

Pest control firm Anticimex said in a statement on Tuesday (Feb 19) that the AVA had completed its investigations into the alleged mishandling of the snake on Jan 29 by its employees, and shared the authority's investigation findings.

"Our investigation revealed (that) as there was an immediate risk to public safety, where the python was found at a location with high human traffic, your staff had to remove the snake as promptly and practicably as possible," the AVA was quoted as saying in the statement.

On Wednesday, the AVA confirmed in a statement that the pest control handlers had removed the snake as promptly and practicably as possible.

The AVA said that a staff member, identified as Mr Farhan, was bitten by the snake while removing it.

"Hence, he had to resort to using necessary force to restrain the python," the statement said.

The authority added that Mr Farhan had acted in good faith to prevent further harm and injuries to himself as well as members of the public, who were in close proximity. 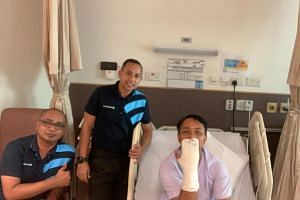 The python was removed and handed over to Wildlife Reserves Singapore.

Experts had earlier criticised the manner in which the snake was handled, calling it "terrible" and "abusive, untrained and uncaring".

The AVA said at the time that it was investigating the feedback on animal cruelty, adding that cruelty to animals is an offence under the Animals and Birds Act.

But Anticimex managing director of its Asian division Tony Hurst later said that not restraining the reptile by any means available, when it tried to evade containment, could have had disastrous consequences in such a busy and populated area.

He also said that the manager of the team that tackled the python was trained in snake handling at the Singapore Zoo.

Mr Farhan had to undergo minor surgery on his hand to remove an embedded snake tooth.

On Tuesday, Anticimex said in its statement that its team would continue to work with experts in the field, and empower its employees to take "immediate and correct actions" in their work.