SINGAPORE - A rider on his personal mobility aid (PMA) crashed into an automated sliding glass door at Singapore General Hospital (SGH) at noon on Monday (Sept 9).

The door at the lobby of Block 5 in SGH fell when a visitor crashed into it while he was on the PMA, said SGH in a Facebook post on Monday.

The hospital added that no one was injured and the broken glass door has been removed.

"We urge all PMA users to be careful when moving around the SGH Campus," it said.

This is the second known PMA accident in recent months.

In June, a woman on a PMA crashed into a sliding glass door at Toa Payoh bus interchange, causing it to shatter. 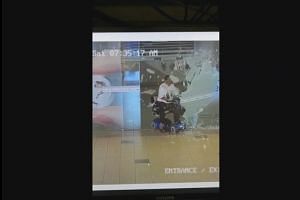 There are no restrictions on the maximum weight or width of the devices, but they must not have a maximum speed exceeding 10kmh.

The penalty for riding a non-compliant PMA on a public path is a fine of up to $5,000, a jail term of up to three months, or both.

Those riding a PMA on the road may be fined up to $2,000, jailed for up to three months, or both. Repeat offenders may face higher court fines or jail terms.

Personal mobility devices have also been in the headlines recently, with 228 reported accidents involving PMDs on public paths in 2017 and last year.