SINGAPORE - Looking up into the sky, 25,000 people at Singapore’s 53rd birthday bash raised their voices in unison to sing Majulah Singapura as fireworks in the formation of five stars shot up.

Up to 3,000 fireworks lit up the sky for about 12 minutes on Thursday (Aug 9) during the two-hour long National Day Parade (NDP). Earlier in the evening, daylight fireworks were featured for the first time during the pre-parade segment which started at 5.30pm.

Singapore's annual birthday bash began in full swing with the Marina Bay Floating Platform serving as the perfect backdrop for the show to utilise the land, water and skies, in the various performances and displays.

The crowd was greeted by show hosts Ebi Shankara, Joakim Gomez, Nadiah M. Din, Sonia Chew and Gurmit Singh, who rallied them in cheers and games in anticipation of the evening's festivities.

The hosts were joined by iconic and lovable Singapore mascots Captain Green, Nila the Lion, Sharity Elephant, Singa the Courtesy Lion, Water Wally and Teamy the Bee, who ambled on stage to the delight of everyone at the float.

As part of the drive to make the parade more interactive, paradegoers were encouraged to pen down something about themselves to complete the "I am..." message, on the placards in their funpacks.

For the first song of the evening, spectators were treated to a rousing performance by home-grown band MICappella, who sang a medley of National Day songs including Singapore Town, Count On Me Singapore and We Are Singapore.

As the band sang its last note, everyone's attention was directed to the skies as a Super Puma appeared about 1,800m above the floating platform.

For the first time ever, paradegoers got to witness the naval combat divers from the Republic of Singapore Navy execute a free-fall jump for the parade.

Donning their operational gear and dive fins, the eight divers glided swiftly from above and into the waters surrounding Marina Bay.

But that was not the only spectacular free fall paradegoers got to see, as soon after, the crowd favourite Singapore Army's Red Lions arrived on a C-130. They then swooped in from a height of 3,800m in their new wingsuits, before landing effortlessly on the platform.

The parade and ceremony segment kicked off immediately after at 6.20pm, with the military tattoo consisting of more than 560 participants, the largest ever for the parade.

This was followed by the march-in of the 33 contingents, with the segment led by parade regimental sergeant major, Master Warrant Officer Tay Ban Heng and parade commander, Lieutenant-Colonel Shawn Ingkiriwang.

Undergraduate Steve Wong, 23, said that his favourite part of the parade was seeing the Red Lions and naval combat divers.

"They really show how much an individual can achieve if they put in effort and practice," he said, adding that he also enjoyed seeing the contingents march.

The combined schools choir also made a comeback for the celebrations after a five-year hiatus. Made up of 220 secondary school students, the choir led the crowd in National Day favourites such as Chan Mali Chan and Munnaeru Vaalibaa.

The platform was also filled with loud cheers and shouts at the arrival of Prime Minister Lee Hsien Loong and President Halimah Yacob, who attended her first parade after taking office in September last year.

NDP: President Halimah waving to the crowd after inspecting guard of honour

Following the national anthem and the state flag fly-past, all eyes were once again trained on the skies for the aerial display by the Republic of Singapore Air Force. The fly-past and display involved a total of 26 aircraft, including helicopters, fighter jets and transport planes – the biggest air force contingent to fly over Marina Bay.

NDP: Fighter jets fly past during the parade

Just as the sun had set, the show segment began with Act 1 - Our People, Our Home, which saw singer Joanna Dong performing My Island Home. This was complemented by a mass dance by 600 performers from the Institute of Technical Education who donned various costumes to represent Singaporeans from all walks of life.

They were also joined by 200 participants from organisations like Sembcorp, Nanyang Polytechnic and Changi Airport Group, who were also there to symbolise the diversity and unity of Singapore.

Fireworks going off at the NDP

Act 2 followed with an enchanting performance reflecting the hopes and aspirations of Singaporeans.

Singer Aisyah Aziz performed Water Is Wide against a visual spectacle of illuminated lanterns and 18m-long balloon garlands which swayed gracefully in the wind.

The segment also saw the waters in the Bay come alive with a water procession of dazzling boats and floats sailing by in the form of iconic landmarks like the dragon and pelican playgrounds.

The third act celebrated Singapore’s spirit and strength through a dance performance by 650 members of the Singapore Soka Association. In sparkling colour-changing costumes, they formed the shapes of a heart and a house on the stage. They were also joined by singers including Shak’thiya Subramaniamm and Vanessa Fernandez, as well as indie pop band M1LDL1FE. 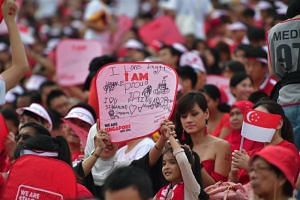 Ms Huang Zijuan, 35, who attended the parade with her son Gideon, six, said of the new activity involving the placards this year: "It's fun and an interactive thing to do to get mass involvement."

Gideon's favourite part of the show was the Singapore Soka Association performance.

The segment was rounded off with a performance by busking duo Mashruddin Saharuddin and his son Nizaruddin, with their rendition of the National Day song favourite - Home.

In the grand finale of the parade, about 500 performers from the People’s Association took to the stage to give a vibrant and energetic performance using ethnic drums to rally the crowd. Composer of this year’s National Day song Charlie Lim also appeared on stage and led the audience in the remix of the 1987 classic We Are Singapore.

The segment also featured a symbolic moment of unity when everyone at the platform was called on to take the pledge and sing the National Anthem in unison.

Teacher Geraldine Tham, 25, was at her third NDP with her fiance, dentist Alexander Lee, 25.

Ms Tham said: "It's special to be here because I studied overseas for the past couple of years, and it's nice to feel the Singapore spirit again. I hope we continue to appreciate what we have, to grow our strengths, and to stay united."

Retired elderly home operations executive Haroon Omar, 69, said: "I wish for more progress for Singapore, and hope that future generations will see more prosperity than what we have now."

The last rush of fireworks and merry music capped off the night’s festivities as a fitting finale for the nation’s biggest party.