SINGAPORE - People here have been interacting with their neighbours less often, such as greeting them, even as fewer of them want to have greater neighbourliness and more want to maintain their privacy.

The findings are from the latest Graciousness Survey commissioned by the Singapore Kindness Movement (SKM), which tracks experiences and perceptions of kindness and graciousness, released on Tuesday (June 27).

The study polled 3,066 people - including Singaporeans, permanent residents and foreigners - via face-to-face interviews over two phases, from July to August 2016 and from December 2016 to January 2017.

It showed that only 23 per cent of respondents exchanged greetings with their neighbours more than thrice a week, as compared to 29 per cent in last year's survey. In terms of striking of casual conversations, only 11 per cent did so over thrice a week, down from 17 per cent last year.

When asked if they wanted to have greater neighbourliness, 26 per cent said they did - lower than the 29 per cent in the previous year. About half (57 per cent) said they think the "current situation is good enough now", 15 per cent (up from 11 per cent last year) said they preferred to maintain their privacy, while the rest said it was unnecessary to socialise with their neighbours. 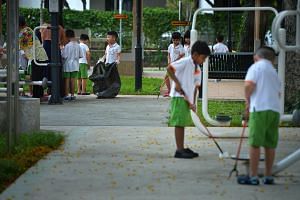 Parents agree they should play main role in imparting moral values to kids, but note lack of time: Study

The annual survey used to have a Graciousness Index, with Singapore scoring 61 out of 100 in 2015, the last time when such figures were released. But organisers said the score had not changed significantly in recent years, and decided to do away with putting a quantitative score on graciousness.

Do you exchange greetings with your neighbours?