Dakota Crescent, one of Singapore's oldest public housing estates, has been drawing visitors interested in its old-school architecture. But speak to the residents and you'll learn a gem of a true Singapore story

Dakota Crescent, one of Singapore's oldest public housing estates, is a peculiar sight.

Swanky condominiums tower over it on one side, and the Sports Hub looms just down the road.

The low-rise estate was built by the Singapore Improvement Trust, the HDB's predecessor, in 1958.

About 60 years on, the end is nigh for the quaint estate of rental flats.

Residents have till the end of next year to move out, after redevelopment plans were announced last year. Many have already moved, but others are hoping to hold on to their homes as long as they can.

I remember playing 'catching' with my neighbours, growing up. There were 20 of us, running up and down the long corridors.

MR ERIC ANG, 46, who has lived in Dakota Crescent all his life.

I will miss the seventh-floor auntie most... I speak to her in Malay and she speaks to me in Chinese. But we still understand each other.

MADAM VELU RUKUMANI, 61, and a resident of 14 years, on her Chinese neighbour, citing how they've helped each other over the years - from borrowing ingredients for cooking to running errands for each other.

"It is really quiet and peaceful here at night," long-time resident Bilyy Koh, 61, says while gazing out of his kitchen window overlooking the canal running beside the flats.

"I'm the only one left in this block so this is like my bungalow," says the former hairstylist.

The bachelor grew up at Block 12 Dakota Crescent - the same unique two-storey block that used to house the iconic Tian Kee provision store.

National Development Minister Khaw Boon Wan has said that living in an HDB flat is "part and parcel of the Singaporean way of life".

This cannot be more evident than in Dakota Crescent - erected even before Singapore's independence.

Mr Eric Ang, 46, who has lived there all his life, says: "I remember playing 'catching' with my neighbours, growing up. There were 20 of us, running up and down the long corridors."

The estate has drawn visitors to its old-school architecture since news of the redevelopment broke.

But the real charm of Dakota Crescent stems from its people. From a karaoke-loving couple to a hoarder to a former hairstylist, this interesting mix of residents living on different floors is what makes Dakota Crescent a vertical kampung.

Many residents were glad to move to a newer flat with better facilities, but they also expressed sadness about parting ways with neighbours whom they've come to know well. 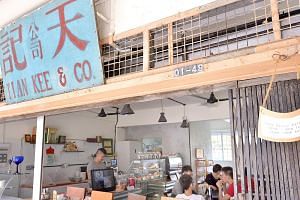 Madam Velu Rukumani, 61, says of her Chinese neighbour: "I will miss the seventh-floor auntie most."

She tells of how they've helped each other over the years - from borrowing ingredients for cooking to running errands.

The resident of 14 years adds: "I speak to her in Malay and she speaks to me in Chinese. But we still understand each other."

A version of this article appeared in the print edition of The Straits Times on July 09, 2015, with the headline 'People behind the old charm'. Subscribe
Topics:
More
Whatsapp Linkedin FB Messenger Telegram Reddit WeChat Pinterest Print Purchase Article Copy permalink