The Indo-Pacific has no place for "empire and aggression", US Vice-President Mike Pence told Asean leaders yesterday in a pushback against China's growing presence in the region.

Addressing the 10 Asean heads of states and governments at their annual summit, Mr Pence said: "Like you, we seek an Indo-Pacific in which all nations, large and small, can prosper and thrive - secure in our sovereignty, confident in our values and growing stronger together. We all agree that empire and aggression have no place in the Indo-Pacific."

Standing in for President Donald Trump, who has drawn criticism for choosing to skip the meeting this year, he said: "Our vision for the Indo-Pacific excludes no nation. It only requires that every nation treat their neighbours with respect, (that) they respect the sovereignty of our nations and the international rules of order."

His remarks come a month after he made a major speech in Washington where he spoke against China's "aggression" in the East and South China Seas, and criticised its use of "debt diplomacy" through which Beijing has come to expand its influence over smaller countries in Asia after giving them unsustainable infrastructure loans.

In response, the United States has canvassed support for its vision of the Indo-Pacific first unveiled by Mr Trump at last year's Apec summit. It is seeking to counter China's state-led trillion-dollar Belt and Road Initiative through channelling greater private sector investments in the region.

The US has also stepped up its "freedom of navigation" exercises in the strategic South China Sea, where China has militarised disputed islands in waters also contested by Brunei, Malaysia, the Philippines, Taiwan and Vietnam.

In his remarks to fellow leaders and Mr Pence during the summit, Prime Minister Lee Hsien Loong said the Asean-US partnership has to be seen in the context of the US-China relationship, stressing that Asean nations want to work with both countries.

NO EMPIRE OR AGGRESSION

Like you, we seek an Indo-Pacific in which all nations, large and small, can prosper and thrive - secure in our sovereignty, confident in our values and growing stronger together... We all agree that empire and aggression have no place in the Indo-Pacific.

"The US-China relationship is the most important set of bilateral relations, and has profound implications for Asean," PM Lee said.

"Asean countries want to be able to engage with both US and China, and maximise the scope and advantages of our cooperation.

"Therefore, we hope that the US-China relations remain stable and hope that all will work out.

"We are open to proposals by external partners to strengthen the existing Asean-centric regional architecture."

At the same time as Beijing and Washington have both sought more influence in the region, they have also been locked in a trade war for most of this year.

Their tit-for-tat tariffs, imposed on trade worth US$350 billion (S$482 billion), have set off tensions across the globe and hurt growth prospects.

PM Lee noted that Mr Pence's reiteration of a "free and open Indo-Pacific" with its fundamental principles - such as respect for Asean centrality, promoting a rules-based order and resolving disputes in a peaceful manner - was aligned with Asean's key interests. 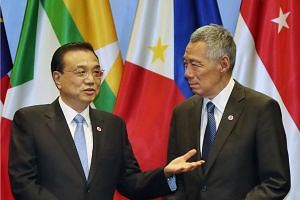 "We also believe that a robust, united Asean-centric regional architecture that is open, inclusive, and invites and interacts with all stakeholders is our best chance of building a peaceful, prosperous and secure region," he said.

PM Lee also welcomed the US-North Korea summit in Singapore in June as the start of a journey to lasting peace on a denuclearised Korean peninsula, assuring the meeting that Singapore would do its bit to fully implement obligations under the United Nations Security Council resolutions.

Noting that ties had grown beyond traditional areas such as defence, he announced that the Asean-US Leaders' Statement on Cybersecurity Cooperation had been adopted. The initiative aims to strengthen the resilience and capabilities against cybercrime and cyber attacks.

PM Lee also said he looked forward to the further development of the US-Asean Smart Cities Partnership, which Mr Pence said would catalyse American investment in the region's digital infrastructure, shoring up its security.

Defence establishments on both sides are set to hold an Asean-US maritime exercise next year.

The US is Asean's third-largest trading partner, and its cumulative investment in Asean totals almost US$274 billion, more than US investments in China, India, Japan and South Korea combined.

Trade between the US and Asean creates more than half a million jobs for Americans.