SINGAPORE - Husbands who force themselves on their wives will not get immunity from being prosecuted for rape, under a recommendation tabled by a committee tasked to review the Penal Code.

The committee, convened by the Ministry of Home Affairs and Ministry of Law in 2016, called for a "full, unqualified repeal of marital immunity for rape" aimed at providing all women, married or unmarried, protection from sexual abuse.

In a letter to Law and Home Affairs Minister K. Shanmugam, dated Aug 31, the Penal Code Review Committee, led by Minister in the Prime Minister's Office Indranee Rajah and Senior Parliamentary Secretary for Home Affairs and Health Amrin Amin, said that its extensive review involved modernising the Penal Code, as "many of the reasons underpinning the previous state of the law are rooted in societal norms which we believe no longer exist in Singapore society".

After two years of discussions, the committee submitted its report to the Government on Aug 31 this year, recommending a full repeal of the marital immunity for rape, along with other recommendations including decriminalising attempted suicide and enhancing the punishment for offences against vulnerable persons, such as the mentally disabled as well as maids and minors aged below 14.

Mr Shanmugam said: "The Penal Code has gone through a series of amendments over the years. Obviously, as society changes, the nature of the offences changes, you keep changing. Intentions are the same, you want to update. This time, I think, it is taking into account all these changes, it's taking a step back and looking at it comprehensively and trying to fit them all together."

Up till 2007, Singapore did not recognise marital rape - that a husband could rape his wife. That year, the law was amended to recognise marital rape under certain circumstances which signalled a breakdown in the marriage, such as if the husband and wife were living apart under an interim judgment of divorce or written separation agreement, if divorce proceedings had begun, or if the wife had commenced proceedings to or had already obtained a personal protection order against her husband.

The repeal would provide equal access to protection for sexually abused wives and ensure consistency with other sexual offences. 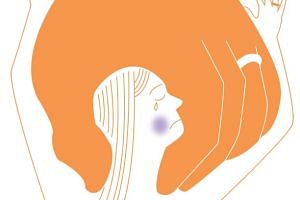 Immunity for marital rape being reviewed

Marital rape: When no means no

At present, husbands cannot invoke marital immunity for the outrage of modesty, also known as molestation, which can carry a penalty of up to two years' jail, or a fine or caning. This includes inappropriate touching on a bus, for example.

The penalty increases to up to 10 years' jail, with caning for cases of aggravated outrage of modesty. These involve additional elements such as threatening to cause hurt or restraining or putting the victim in fear, such as restraining her in a lift against her will.

Yet, husbands have marital immunity for rape.

The maximum penalty for rape is 20 years' imprisonment, as well as fine or caning.

Said Mr Shanmugam: "The changes they are recommending, I have talked about some of them in the last two years as to what we would like to see as well. Women, for example, I have thought it odd that we still have immunity for husbands who rape their wives. A woman's body is her own. And even if she is your wife, she is entitled to say no. And no means no. So that, they are proposing to repeal the immunity. "

There has been a marked global shift towards criminalising marital rape. The United Nations (UN) General Assembly declared marital rape a human rights violation in 1993. Currently, more than 100 countries do not grant marital immunity for rape, including the United Kingdom, South Korea and Thailand.

In 2009, local advocacy group No To Rape called for a repeal of marital rape immunity in an online petition which garnered more than 3,600 signatures.

In 2011, local non-government organisations such as the Association of Women for Action and Research (Aware) called for the repeal of marital immunity in their submissions to the UN Committee on the Convention on the Elimination of Discrimination against Women, for Singapore's fourth periodic report.

Aware's executive director Corinna Lim welcomed the recommendation. "A long overdue, full and unqualified repeal of marital immunity for rape would be a momentous step forward for women's rights," she said.

"The repeal would be powerful signal that the state does not condone any form of violence against women, including within marriage."