SINGAPORE - There were 20 coronavirus cases reported on Sunday (June 6), of which six are in the community and 14 imported.

Health Minister Ong Ye Kung said on Sunday that Singapore is heading in the right direction, with the number of infections dropping further in the past week.

The sole unlinked case on Sunday is a 13-year-old student of Paya Lebar Methodist Girls' School in Hougang, said the Ministry of Health (MOH) on Sunday night.

The student developed anosmia - or the loss of smell - on May 29, but did not seek medical treatment until last Friday.

The remaining five community cases were linked to previous patients and already in quarantine.

Two children were linked to the Tektronix cluster and are family members as well as household contacts of previous patients.

They are a 13-year-old student of Canberra Secondary School and a 10-year-old pupil of Endeavour Primary School.

Both were last in school on May 18.

A 29-year-old delivery rider at Pizza Hut (Bukit Merah) who resides at Wanderloft Capsule Hostel was added to the McDonald's delivery riders cluster.

He was swabbed at a general practitioner clinic on May 22 and had tested negative.

He was subsequently identified as a close contact of previous cases and placed in quarantine the same day.

The delivery rider is asymptomatic and his infection was detected during testing last Saturday.

The number of unlinked cases in the community has decreased from 23 cases to 17 over the same period.

The Tan Tock Seng Hospital and Pasir Panjang clusters have also been closed, after no new cases were linked to them for 28 days.

Mr Ong noted that the percentage of infected people detected during quarantine has risen from 57 per cent to 73 per cent.

“This means very little chance for them to move around and spread to others,” he said.

Unlinked cases – which Mr Ong previously called the most worrying group – have fallen from 18 per cent to 15 per cent of new cases.

Foreigners with housemates in service line take precaution against Covid-19

Fourteen imported cases were also reported on Sunday. Among them are six Singaporeans and six permanent residents.

All of them have been placed on stay-home notice or isolated on arrival in Singapore, said MOH. 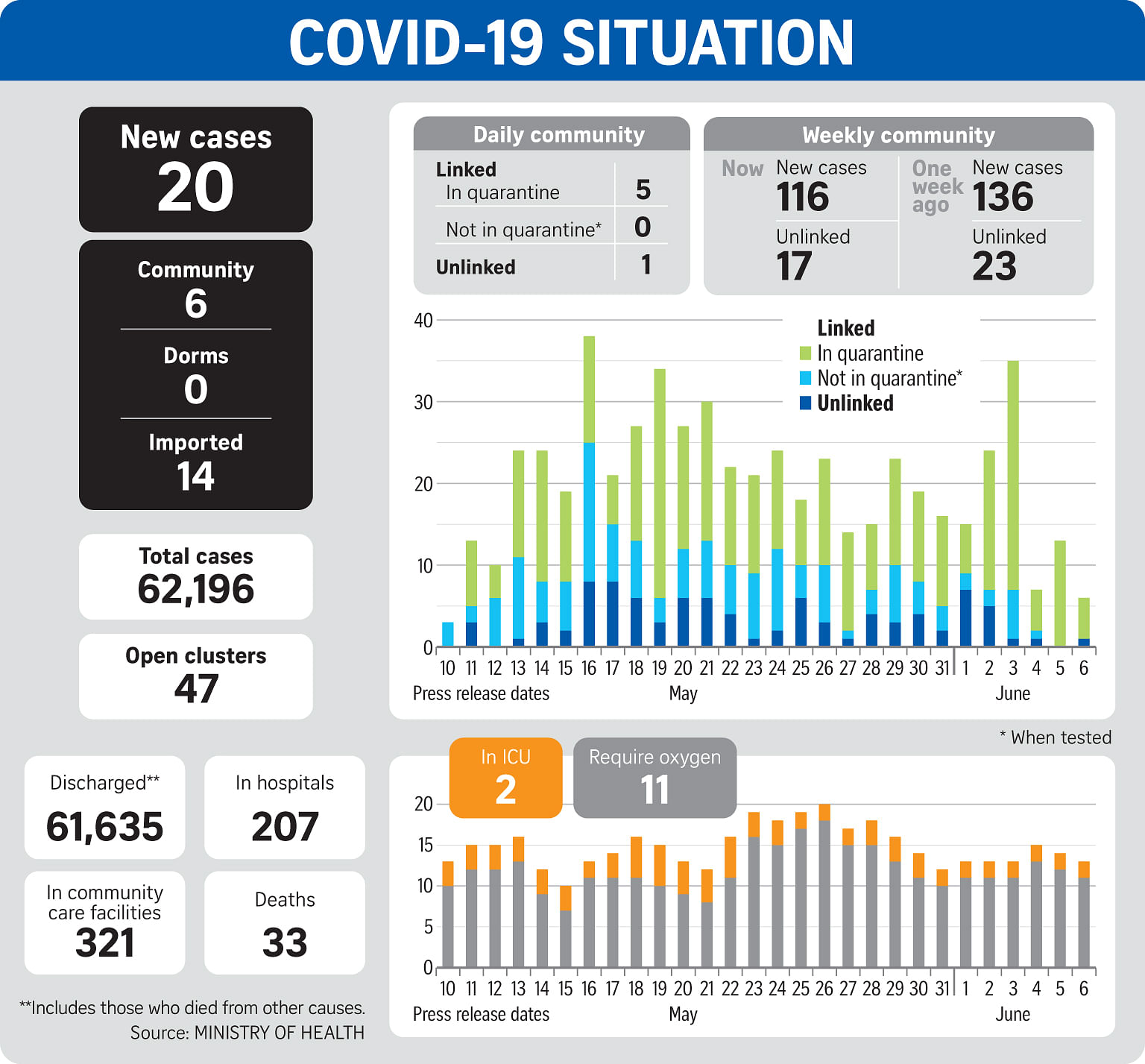 Twenty-two more Covid-19 patients were discharged from hospital on Sunday.

Another 207 remain hospitalised, with two in critical condition under intensive care.