SINGAPORE - It may be no easy task persuading people to return their own trays at hawker centres, even with a system being rolled out that has customers paying a deposit that they get back when they return their trays.

At two hawker centres that charge such a deposit, many people get around it by simply not taking a tray.

Hawkers at Marsiling Mall and Bukit Merah Central food centres said the number who refuse a tray ranged from 50 to 90 per cent of their customers.

These two are the first of up to 25 that will eventually use a tray return system, which, along with centralised dish washing services, is a means to boost productivity in a tight labour market.

At Marsiling Mall Hawker Centre on Tuesday (Jan 30), which was about 90 per cent full at lunchtime, most customers The Straits Times observed did not take trays for their orders. There were also used bowls and plates left on tables.

Hawkers told The Straits Times that customers do not want to incur the extra cost of 50 cents per tray.

A 59-year-old dessert stall hawker, who only wanted to be known as Mr Chan, said nine in 10 of his customers do not take a tray. Before the system was in place, almost everyone would take one. 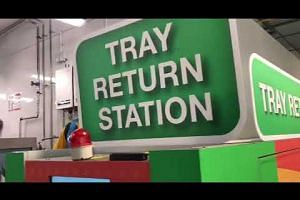 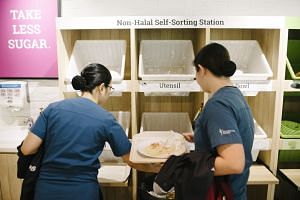 Mr Chan, who has been in the business for more than 30 years, said he has had unhappy customers demanding to know why they have to pay an extra fee.

One customer, Mr Ye Ah Mao, 65, who is unemployed, echoed the views of those who do not want to return their own trays.

He said: "It is so troublesome because I have to walk so far to the tray return station. During peak hours I also have to queue up to return the tray."

Cleaners had varying views, with one saying some customers even return just the tray and leave the used dishes on the table, but another noting that people generally do return their own trays.

The dinner crowd at Bukit Merah Central was thin but hawkers there told The Straits Times there had been a noticeable difference in cleanliness since the system was rolled out.

But Mr Tan Hock Soon, 59, another drink stall owner, said the majority of customers do return the dishes they use.

"It solves the problem of birds coming to eat the leftovers on the table. There used to be a lot of birds, but now there are fewer," he said.

By and large, customers seemed to accept the necessity of clearing up after themselves, but reactions to the tray deposit system were mixed.

"Sometimes when people forget their trays, I will help them to return it. It earns me an extra $1 and I can help to keep the place clean," she said.

Another, Ms Lim Mei Chun, a manager at a pharmaceutical company in her 30s, felt a reward scheme giving people points for returning their trays that they could redeem for freebies, would be more effective.

"It's a starting point. Once the habit of returning trays is built into people, all these incentives will not be needed as much anymore," she added.

However, Mr Eric Mao, 44, a manager at an electronics company, said hawker centre managements should be stricter, and make it compulsory for customers to take a tray.

"The system fails if people choose not to take the tray and end up leaving all their bowls on the table," he said.

Advocating patience was Dr William Wan, general secretary of Singapore Kindness Movement, who said it would take time for the public to adopt a habit of returning trays.

"We can use constant yet subtle reminders like posters to educate and remind the public to be considerate and clear the tables for the next diner, especially during peak hours," he said.

He also urged parents to inculcate these values into their children.

"If we make it enough of a habit at home, it will be a natural habit to us everywhere else."