Parts of the historic Tanjong Pagar Railway Station's platforms will be making way for the construction of the new underground Cantonment station on the Circle Line.

The Land Transport Authority (LTA) said yesterday it will seek advice from the heritage community on "possible solutions" for the two affected parallel stretches. The railway station was gazetted a national monument in 2011, alongside two 80m stretches of the platforms. The remaining 350m on each side are not part of the gazette.

The Straits Times understands that the authorities met six heritage experts on Tuesday and presented them with three options.

They were: to preserve the old platforms by dismantling, storing and reinstating them; to produce a replica; or to create a "new interpretation" of the railway platforms.

All the experts picked the first option. Singapore Heritage Society (SHS) president Chua Ai Lin said: "It is the only choice if you are serious about preserving history. The platforms must be reinstated as they are crucial in maintaining the railway's integrity." LTA has also engaged Studio Lapis, an architectural conservation specialist consultancy, to assess the heritage significance and condition of the former railway station, and advise on mitigation measures. Its co-founder, architectural restoration specialist Ho Weng Hin, said the second option is not feasible. It is unlikely that builders can replicate the former station's reinforced concrete platform structures to the "same level of craftsmanship and proportions", he said. The 1932 station, designed by colonial architectural firm Swan and Maclaren, was the southern terminus of the Malaysian KTM railway company's network for 79 years.

The Cantonment station, slated to be ready by 2025, is one of three new stops for the sixth stage of the Circle Line. The other two stations are Keppel and Prince Edward. 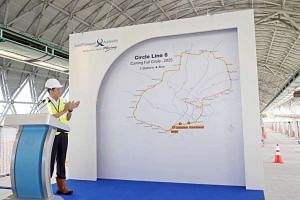 LTA chief executive Chew Men Leong said the Cantonment location was selected as it fits in with the overall alignment, will serve existing catchments, and cater to future developments such as the Greater Southern Waterfront. LTA stressed that measures will be taken to sensitively integrate the new station with the railway building. 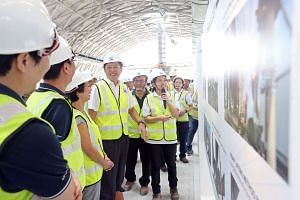 Experts said locating Cantonment station alongside the old railway complex could provide a sense of historical continuity. To achieve this, heritage enthusiast and naval architect Jerome Lim suggested that the old structure serve as a thoroughfare for future commuters.

But the authorities have yet to decide if the former railway will be accessible to the public when the new station is ready. The Tanjong Pagar Railway property, managed by the Singapore Land Authority, is now usually open on public holidays.

Experts also raised the question of why the platforms were not fully preserved in the National Heritage Board's (NHB) gazette.

Heritage law expert Kevin Tan said: "Without its platforms, the railway station will lose its sense of coherence. It would be like a head without its body."

They said: "We did not foresee it at the point of gazette, but this flexibility has facilitated plans to incorporate the new MRT station at the site, which will be critical to the former railway station's future success as a community node."

SHS exco member Yeo Kang Shua said the construction of the Prince Edward station, located in the heart of the historic Tanjong Malang, presents an opportunity for an archaeological impact assessment. "There should be an investigation into the first few metres of earth where the cultural layer lies."