SINGAPORE - Private developers may have a role in redeveloping ageing Housing Board flats as the Government studies how best to implement a new scheme for such homes.

On Monday (Sept 10), Minister for National Development Lawrence Wong said in Parliament that he “will not rule (private developers) out” for the Voluntary Early Redevelopment Scheme (Vers), which was introduced last month to pace out the redevelopment of old flats over 20 to 30 years.

But even if private developers are involved, “let’s be very clear that our aim is to redevelop public housing estates, so we will ensure that any redevelopment is done in a way that preserves the character of our HDB towns and supports HDB’s mission to provide affordable and quality homes for Singaporeans”, he said.

He did not name these sites, but an upcoming Holland Village extension with retail shops and homes, which was tendered out to private developers, will be built on land acquired earlier under Sers. Also, the site of five old HDB blocks in Zion Road has been earmarked for a future hotel, as well as new homes.

In total five MPs asked questions on Vers, such as which precincts would be selected. During supplementary question time, they also reflected the concerns of residents, such as how much notice would be given to residents if their flat was selected for Vers.

Mr Wong added that the authorities need more time to work out the details, including the extent of coverage of Vers and how compensation will be computed, though he did not say when these details would be released. 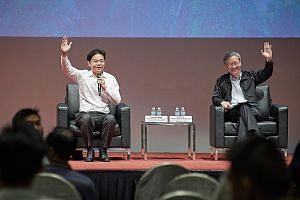 Price of 50-year-old HDB flat can appreciate over the next 10 years: Khaw Boon Wan

"In particular, we will ensure that we implement Vers in a fiscally sustainable way, so that it does not become a burden for the next generation," he said.

But Mr Wong said that more flats would be eligible for Vers, as compared to the Selective En bloc Redevelopment Scheme (Sers), which is limited to precincts where there is high development value to be unlocked. Sers applies to about 5 per cent of HDB flats.

However, the compensation terms for Vers would be less generous "because we will be redeveloping land that is more built up", he said.

Besides Vers, and an enhanced upgrading programme for older flats, the Government is also looking at how to make the use of Central Provident Fund monies more flexible so buyers can purchase HDB flats with shorter leases while ensuring they have enough to retire on.

Mr Wong did not say when these details would be ready.

Of these plans that will span the next few decades, Mr Wong said: "Whether they come to pass depends on our external, economic and financial situation. But this Government has a track record of delivering on our commitments."