SINGAPORE - Divorcing couples with at least one child aged below 21 will soon have to clear a few more hurdles before breaking up.

If such couples cannot agree on divorce matters such as co-parenting plans, they will have to attend a parenting programme - before filing for divorce. This is to better protect children affected by their parents' break-ups.

It is one of several changes to the Women's Charter - which governs marriage and divorce matters here - that were passed by Parliament on Monday (Feb 29).

Other changes include allowing men who are incapacitated by illness or disability to apply for maintenance payments from their former wives; the voiding of sham marriages; and stronger law enforcement against people running websites that offer or facilitate prostitution.

The Women's Charter was last amended in 2011, to require divorcing parents with children to attend mediation and counselling after filing for divorce. 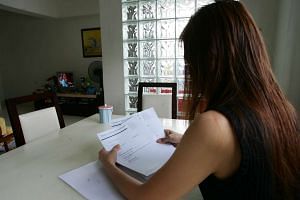 Move to extend maintenance payments to some men a 'calibrated' measure

Minister for Social and Family Development Tan Chuan-Jin said on Monday that the mandatory counselling post-divorce was effective in helping some divorcing couples agree on matters concerning their children in less acrimonious ways.

"But going for mandatory mediation and counselling on children's issues, after first battling it out in court to settle the divorce, is not ideal. Many divorcing parties have become hardened in position, or too caught up with their emotions," he said.

It is better to have divorcing parents consider their children's well-being early, before the divorce process formally starts, hence the new requirement of attending a pre-divorce parenting programme, he said.

Couples who want to divorce will have to go through an online self-reflective segment in which they learn about the impact of divorce on children. If they still want to divorce and cannot agree on divorce matters, they need to attend the parenting programme.

This is a two-hour session with a counsellor, and will cover issues such as housing and school arrangements, and positive co-parenting after divorce. It will be funded by the Social and Family Development Ministry.

Ten MPs - six women and four men -spoke during the debate on the Bill.

Some expressed concern that the mandatory parenting programme would delay the divorce process, making it more agonising for the couple. Mr Louis Ng (Nee Soon GRC) suggested it be waived for victims of family violence.

Mr Tan said the programme aims to help couples be better informed, not make the process more onerous. For exceptional cases, the court can allow divorce proceedings to continue even if the parent has not completed the programme, he said.

Dr Lily Neo (Jalan Besar GRC) suggested that the Government identify couples at higher risk of breaking up, and require them to go for counselling courses after being married for a year, then after the second year and the fifth year.

Most of the changes to the Women's Charter will be implemented by the end of the year.