Home Affairs Minister K. Shanmugam revealed this during his ministry's (MHA) Committee of Supply debate in Parliament on Wednesday (April 6), as he outlined efforts to boost the Home Team's intelligence and investigation capabilities.

Stressing again how the threat of terror attack on Singapore is at its highest in recent times, Mr Shanmugam explained that "in this heightened threat environment, we have to use all available resources at our disposal ".

And this includes the Government's about-turn to use data provided by public transport video cameras and the ERP system for tracking purposes.

In February, privacy concerns were raised when the Government announced that it would be rolling out the next generation ERP system, which will be able to track the precise whereabouts of vehicles around the clock. 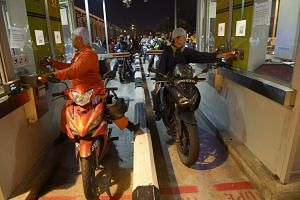 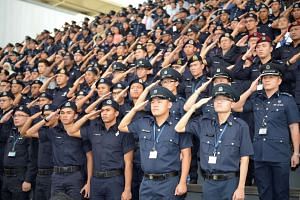 "The Home Team must be able to collect and analyse suspicious travel patterns, and respond swiftly and decisively," said Mr Shanmugam.

He also said SG Secure, an initiative to equip the community with skills to respond to terror threats, will help maintain social cohesion and harmony.

He was responding a point raised by Jurong GRC MP Rahayu Mahzam, who said strong bonds in the community are needed so "vigilance does not develop into unwarranted suspicion and discrimination, or worse, resentment". She also said Singapore has to guard against Islamophobia.

Protecting racial and religious harmony is one of the key tenets of the counter counter-terrorism response, stressed Mr Shanmugam, adding that anti-terrorism messaging would be calibrated with sensitivity. It will make clear that the fight is against extremism and violence, and not against any single religion, race or ethnicity.

Parliamentary Secretary Amrin Amin said SG Secure would be "more than just a public awareness movement, it will be a call to action", pointing out that the initiative would be launched later this year in schools and neighbourhoods.. SG Secure will equip the community to fight the terror threat in three ways, he said.

First, it will teach the public how to protect themselves and others, if they are caught up in an attack.

Second, programmes to safeguard the multiracial and multi-religious social fabric will be put in place.

Third, SG Secure will also seek to build resilience, so society can bounce back quickly after a terror strike.

"The programmes under SG Secure will sensitise the community to threats arising from terrorism, extremism and religious or racial strife," he said.