SINGAPORE - Minister-in-charge of Muslim Affairs Yaacob Ibrahim on Thursday (April 14) announced a slew of plans, from mentorship schemes to coding programmes for the young, to help the Malay/Muslim community better seize the opportunities offered by the changing economy.

This year, the unit is picking up speed. Among its plans for the year are the NextStop Sessions, which aim to help students from secondary schools, ITEs and polytechnics better understand the diverse academic and career pathways open to them.

It is also introducing a mentorship scheme for secondary level and ITE students. 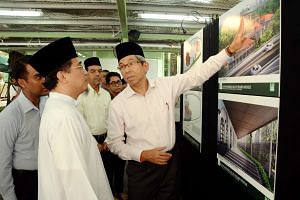 "Some of our students may not be well-informed of the available opportunities, or they may lack the confidence to pursue their aspirations," noted Dr Yaacob. Mentors can then give them the boost they require.

Later this month, Mendaki will launch CM-Tech@Heartlands, a coding and robotics programme targeted at younger students. The programme aims to reach out to 450 students by 2017.

On the education front, Mendaki is training its pool of tutors and looking at ways to make its programmes, like its flagship Mendaki Tuition Scheme (MTS), more accessible.

The MTS@Mosques programme will be expanded to include Al-Mutaqin Mosque in Ang Mo Kio and Al-Mawaddah Mosque in Sengkang, given the high demand in these areas.

And six new community partners - including Chongzheng Primary School and the Braddell Heights Community Club - will host Mendaki Homework Cafes to help students with their schoolwork. This brings the total number of centres to 18, with spaces for 300 students at any point in time.

Turning to the family, Dr Yaacob had good news to share.

Divorce rates, meanwhile, have remained stable, averaging at 1,600 a year over the last five years.

However, Muslim couples with younger grooms aged 20 to 24 were more likely to split up: the divorce rate was 1.5 times higher than couples with older grooms.

So the community will work on strengthening the marriages of young couples, in addition to minor couples. From the second half of this year, Inspirasi Hubs - dedicated centres for marriage preparation and enrichment for young Muslim couples - will extend their services to couples with grooms aged 21 to 24.

The Syariah Court will work with Muis Academy to develop a new certification programme on the practice of Muslim law in Singapore, aimed at helping practitioners understand marriages, divorces and inheritance as practised in Singapore.

Since 2005, the Syariah Court's marriage counselling programme has helped over 30,000 couples facing issues. About 45 per cent of them reconciled.

The next set of Singapore Syariah Appeals Reports - a source of reference when it comes to Muslim family law - will also be produced in the second half of the year. The first edition was published in 2012.

"Our strength as a community depends on strong families and how we look after those in need," said Dr Yaacob.

Muis disburses zakat to an average of 5,300 benficiaries annually. But with tweaks to the eligibility criteria and the increase in disbursement quantum, it was able to offer $17.2 million in assistance to the poor last year - almost half of the total zakat collected.

"We should be proud of what we have achieved. Indeed, we are in a better position than we were 50 years ago and cannot afford to be reckless or to assume that we have arrived," said Dr Yaacob.

"But we must remain humble for the journey is never over. What lies ahead is uncertain. Just as our pioneers struggled to make a nation out of disparate communities, struggle hard we must as we move into the future. So let us not wait for others to find the solutions to the challenges that trouble and pain us."