SINGAPORE - The authorities are reviewing adoption laws, as well as looking into the issue of surrogacy, following a recent landmark case involving a gay father adopting his biological child who was conceived through a surrogate in the United States.

Even so, Minister for Social and Family Development Desmond Lee stressed the Government's position on same-sex parenthood, saying it does not support the formation of families by gay parents.

Mr Lee was responding to three MPs in Parliament on Monday (Jan 14).

Some celebrated the ruling as a mark of progress for the gay community, while others pointed out that it goes against what constitutes a family in Singapore. Yet others felt the laws surrounding surrogacy were unclear, and wondered if the man had exploited a loophole to become a father.

Currently, surrogacy is barred in Singapore. Those who have gone abroad for it and returned home to apply for adoption of their surrogate children will have their applications assessed on a case-by-case basis.

To date, the courts have granted the adoption of 10 surrogate children to married couples who had turned to surrogacy because of infertility issues. 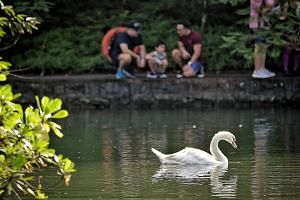 But the surrogacy issue, Mr Lee said, " is a complex issue with ethical, social, health and legal implications for all parties involved''.

"For commercial surrogacy in particular, concerns have been raised about the exploitation of women and commodification of children. These issues are not trivial, and warrant careful study and discussion," he added.

Meanwhile, he issued this note of caution: "Persons who are considering surrogacy should take this into account from the outset while making their decision, as such factors could have a significant impact on the child."

Mr de Souza, in response to the speech, pointed out that commercial surrogacy "commodifies the life of a baby" and was "exploitative to women", and urged the authorities to bar the practice explicitly, including in adoption laws.

While acknowledging the concerns, Mr Lee said: "Whether we should completely prohibit surrogacy by Singaporeans within Singapore or all over the world... it's something that we must consider holistically and carefully, keeping in mind the wishes, aspirations and concerns of mothers who would otherwise not be able to conceive their own flesh and blood."

In the review of the Adoption of Children Act, the focus is to see how it can be "strengthened to better reflect public policy, which is, in turn, a reflection of the values of our broad society today," Mr Lee said.

Noting that the "prevailing social norm" is still that of a man and woman marrying, and having and bringing up children in a stable family unit, he said his ministry did not support the gay couple's appeal to adopt the child, as "this would have been contrary to public policy".

He added: "For instance, while the welfare of the child should always be a very important consideration in adoption proceedings, we are looking at whether the Adoption of Children Act needs to be amended so that an appropriate balance can be struck when important public policy considerations are involved."

Dr Fatimah later asked if Mr Lee's ministry would be involved in monitoring the gay couple's child and to keep an eye on his psychological and mental well-being.

Mr Lee replied: "We are concerned about the formation and mainstreaming of same-sex parent family units in Singapore, but when it comes to the welfare of the child, we have to act on the basis of whether there are concerns."

In spelling out the official position, Mr Lee reiterated that lesbian, gay, bisexual and transgender people have a place in Singapore society and are entitled to their own private lives.

"Just like other Singaporeans, they have access to opportunities and social support such as education, employment, and healthcare, and should, like all Singaporeans, not be subject to prejudice and discrimination," he said. "However, we must be mindful that a push for rights and entitlements which broader society is not ready for, or able to accept, will provoke a pushback, and can be very socially divisive.

"A push to use legislation or the courts to precipitate social change involving issues as deeply held and personal as this polarises society."

He added: "The Government's policy is not to intrude or interfere with the private lives of Singaporeans, including homosexuals, and their relationships or partnerships. However, we do not support the formation of family units with children and homosexual parents through institutions and processes such as adoption."

Mr Lee also said that while there are "increasingly diverse forms of families" here, the family structure the Government encourages is that of the married man and woman bringing up children in a stable family unit.

"Most of us would agree that it is ideal for children to grow up in families anchored by strong and stable marriages... It follows from this that the Government does not encourage planned and deliberate single parenthood as a lifestyle choice," he said.

Referring to the recent case, Mr Lee said: "While an adoption order serves to make a child legitimate under the law, it does not on its own guarantee benefits and privileges such as citizenship, education or housing."

Access to housing, for example, will continue to be determined by prevailing criteria, in line with public policy supporting parenthood within marriage.

But, he added: "All Singaporean children, regardless of their legitimacy status, will receive government benefits that support their growth and development, including healthcare and education benefits."