SINGAPORE - A total of 682 enforcement notices were issued for pigeon-feeding offences over the past three years,  and to combat the problem, a pilot programme conducted in Yio Chu Kang might be rolled out to the rest of Singapore.

Senior Parliamentary Secretary for National Development Sun Xueling said this in Parliament on Wednesday (May 8) in response to queries posed by Mr Lim Biow Chuan (Mountbatten) on the number of summons issued for pigeon feeding and steps taken to deter such behaviour by residents.

Ms Sun said that the National Parks Board (NParks) conducts surveillance at pigeon-feeding hot spots and partners with the National Environment Agency (NEA) and town councils to educate residents about the environmental health and hygiene concerns around feeding pigeons.

Mr Lim asked if more could be done - such as heavier penalties for pigeon-feeding offences, or increasing the manpower given to NParks to step up patrols.

"I think the message has not gotten to many of these pigeon-feeders, that whatever they are doing are causing a health risk to other people," said Mr Lim, citing the birds' droppings as a health hazard.

Ms Sun urged members of the community to come forward to provide information on pigeon-feeding hot spots so that the manpower needed for targeted patrols can be put to more effective use.

She cited a pilot programme launched in Yio Chu Kang where cameras are used to nab residents found feeding pigeons and images of these offenders are put up around the neighbourhood to deter such behaviour and "create community awareness". 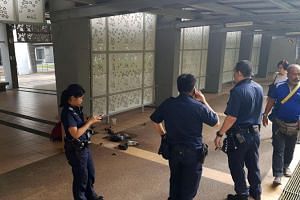 Controlling pigeon population by poisoning them is cruel

While Ms Sun said that the results of the pilot programme, which was carried out from May to October last year,  have “been quite promising” she did not provide more details on the initiative.

Ms Foo Mee Har (West Coast GRC) asked if the pilot programme could be rolled out to other neighbourhoods as her town council had seen little results after employing all other strategies mentioned by Ms Sun over the last nine years.

Ms Sun in response: "Although the pilot seems to have worked quite well in YCK, I think we probably would have to distill it further, and work closely with the local MPs and grassroots advisers to see how we can adapt it for use in the local community."

Mr Louis Ng (Nee Soon GRC) also weighed in on the issue, asking if it was possible to increase the manpower for surveillance and emphasised that culling pigeons was not an option.

"The more you cull, the more pigeons you have. So I really hope that this pilot that SPS has mentioned, we can roll out nationwide so that we can now effectively tackle this problem," said Mr Ng, who is founder of the wildlife rescue and animal welfare charity Acres.

Ms Sun responded that the town councils employ a variety of initiatives to resolve issues such as littering and pigeon-feeding, and culling is one of the many solutions.

She added that the Ministry of National Development is looking into other measures, including the use of bird contraceptives, to manage the pigeon population.