SINGAPORE - A total of 25 schools, as of April 26, have offered their Secondary 1 students the cervical cancer vaccine as part of the national school-based vaccination programme, said Senior Minister of State for Health Amy Khor on Tuesday (May 7).

She added that 93 per cent of the students opted to take the free vaccination.

In March, the Health Ministry announced that all Secondary 1 girls in national schools, including madrasahs, will be offered free vaccination against the human papilloma virus (HPV) from April to protect them against cervical cancer.

Around 200 women in Singapore get the cancer each year and 70 die from it.

Dr Khor, in her response to Mr Alex Yam (Marsiling-Yew Tee GRC), said most parents who opted out did so as their daughters had already been vaccinated, or because they preferred to take them for the vaccination on their own.

Fewer than 1 per cent were concerned with the side effects, she added.

"When parents do not give their consent, we contact them to provide them with information of the benefits and importance so that they can make an informed decision," she said.

She stressed that it is important for parents to refer to "reliable and verifiable sources of information" on the vaccine. These include websites such as her ministry's HealthHub, the World Health Organisation (WHO), the United States Centres for Disease Control and Prevention, and the European Medicines Agency.

The vaccine is recommended by the WHO and other leading health agencies for the prevention of cervical cancer. 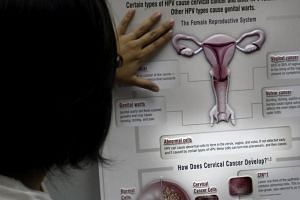 Dr Khor added: "Of course, parents ought to... speak to the doctors who will be best placed to give them advice and provide accurate information."

Mr Yam also said some parents have raised concerns that the HPV vaccine may lead to promiscuous behaviour.

The vaccine is typically recommended for women who have not yet had sex, as sexually active women may have been exposed to virus strains targeted by the vaccine.

Dr Khor said there is no evidence that women who have got the vaccine started having sex earlier or have more partners than women who have not been vaccinated.

She said her ministry and the Health Promotion Board will continue to highlight the benefits, importance and safety of the vaccination to parents and students.